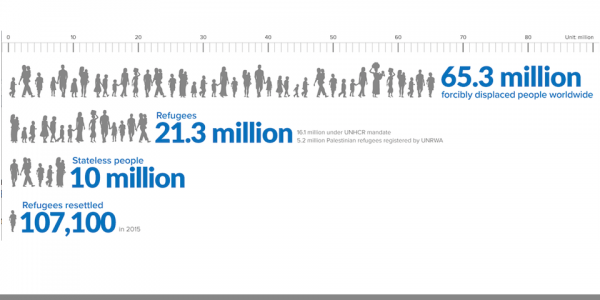 Time to Go Big for Refugees

Posted on February 21, 2017 by Robert G. Ottenhoff, president and CEO of the Center for Disaster Philanthropy
This is a blog about big and small.

The number of refugees worldwide is big. According to the United Nations High Commissioner for Refugees (UNHCR), the number of displaced people is at its highest ever since World War II — 65.3 million people. To put it another way a little under 1% of the world’s population is either “an asylum-seeker, internally displaced or a refugee.”

The number of refugees from just the Syrian civil war is also big. In 2016, the UN identified 13.5 million Syrians requiring humanitarian assistance — almost half displaced within Syria. Turkey, Saudi Arabia, Jordan, and Lebanon have taken the brunt of those fleeing the countries.

The needs of refugees are big too. As Mercy Corps succinctly put it in one of their recent emails: Imagine fleeing your home with little more than the clothes on your back and what few items you can carry. You are running for your life — forced to leave your house, job, school, car, belongings, and memories behind.

Although the number and needs of refugees may be big, the age and stature of most of them is small. A recent Unicef report states that “children now make up half of all refugees” despite the fact they make up less than a third of the world’s population. According to Unicef, “globally some 50 million children have either migrated to another country or been forcibly displaced internally; of these, 28 million have been forced to flee by conflict.” Save The Children reports that, “refugee children are five times less likely to attend school than other children. Currently, 50 percent of primary school-aged refugee children and 75 percent of secondary school-aged children are completely left out of the education system.”

Financial support to help refugees has been relatively small. The Obama White House reported that the U.S. is the world’s largest bilateral donor of humanitarian aid and has provided $4.5 billion since the start of the Syrian crisis. They also estimated that American businesses have committed to investing, donating or raising more than $650 million. The UN Refugee Agency budget alone for 2017 is $6.7 billion; however during the last year, for example, UNCHR’s voluntary contributions stood at just 40 percent of its current budget.

Voluntary charitable contributions from here in the U.S. have also been small. Our summary of the global refugee crisis lists less than $10 million in donations — certainly not a complete summary but a fair representation of donor involvement. Why? I have several guesses: lack of interest in complex humanitarian crises, uncertainty over what to do, muted media coverage, and a lack of sense of urgency over the need. Whatever the reason, refugees have not been a major focus for American philanthropy, with a few exceptions.

There’s still a chance that the American philanthropic response could be big. Just this week The Patterson Foundation announced that it is making a $250,000 contribution to the CDP Global Refugee Crisis Fund. Its second gift brings The Patterson Foundation’s investment in the CDP fund to $550,000 since 2015. Please read more about their aspirations for their investment in the fund.

I’m hoping other donors will find inspiration from the big, bold step The Patterson Foundation has made and get involved. It’s not too late to make a difference and the needs will undoubtedly continue to grow bigger in the days to come.