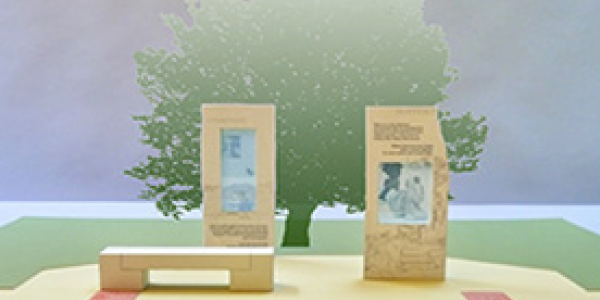 Editor's Note: Ann Wykell is the art consultant on Patriot Plaza, the ceremonial amphitheater at Sarasota National Cemetery. Ann will be guest blogging about the process to incorporate commissioned art at Patriot Plaza.

I have often been asked, as the art consultant to the Patriot Plaza project, how did we find the artists who could create art that seems so perfect for this unusual space?

Art is a visual experience, but words inspired much of the art in Patriot Plaza.  We began with the words that defined the mission of the Patriot Plaza:  Honor, Service, Inspire and Patriotism. Then came the  words from two groups with first-hand experience of our subject.

The story began more than two years ago in two meetings. The first was in the conference room of The Patterson Foundation where Sandy Beckley, lead initiative consultant for the Military Initiative, and I met with some members of the Sarasota National Cemetery Committee – a group of leaders of local veterans groups (mostly over 50 years old) who had been part of the development of the cemetery. The second meeting was in a room at the Cong. CW Billl Young Armed Forces Reserve Center in Pinellas Park where we sat down with some active duty reservists who had recently served in the Middle East and who were currently in the unit that served as honor guards at funerals in national cemeteries throughout Florida.

These were listening sessions. We wanted to understand what kind of art resonated with these men and women, who had been in the service from the Korean War through today’s conflicts.  We also were seeking information to share with potential artists that would help them connect with our goals when they designed art for Patriot Plaza.

When we showed a variety of art on military themes to the two groups, they did not always agree on which they preferred.  But when we gave them a short list of words, and asked them to add words to the list and select the most important ones to describe the United States military, and the military experience – the list was almost the same from both groups.

These words were shared with artists to help inspire their creative thinking. Lead artist Larry Kirkland used the words in his design for Support, Service, Sacrifice. Some  will be etched in red Colorado granite pavers in the sidewalk in front of his sculptural tablets. Others define the subjects of a series of 16 marble tablets. His tablet words are: Support, Mission, Order, Challenges, Morale, Resilience, Sacrifice Democracy, Legacy, Integrity, Teamwork, Guidance, Courage, Endurance, Conflict, and Service.

Not all of the art in Patriot Plaza includes words, but each artist was informed by the words of our military informants.

Artist Larry Kirkland is known for his creative combination of words and images. For Patriot Plaza, he will create 16 white marble tablets. Each one features a single word that is expanded through a photograph, a quote from a member of the military or a family member, and a drawing. Eight tablets are about the family experience and eight are about the military world.

For additional questions about the Patriot Plaza art process, Ann Wykell may be reached at akwykell@gmail.com.