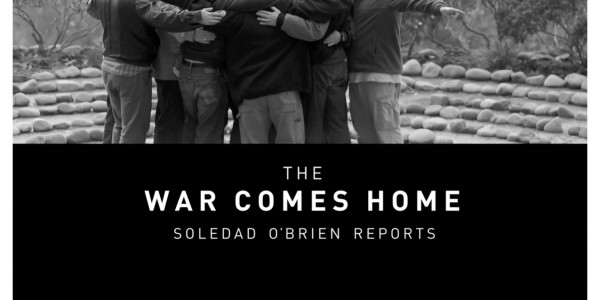 Witnessing the mission: The media's role in sharing the military experience

American history is rife with stories of our veterans’ heroism and sacrifices in battles near and far, volumes of which remain buried and untold by the men and women who lived them. For many veterans, simply sharing their stories with others can serve as a path to healing from the trauma experienced on the front lines.

Yet these stories harbor an even greater value: the potential to educate Americans on the importance and realities of these courageous acts made on their behalf. The media, with its wide reach and resources, plays a vital role in unlocking this potential for the public.

Award-winning journalist Soledad O’Brien understood this power during the production of “The War Comes Home,” a film following two young veterans struggling with Post-Traumatic Stress. Rather than report the same humbling statistics on veteran suicide rates, O’Brien humanizes this data by illustrating the lives of these men and their families.

The film, which was screened during the Veterans Legacy Summit, provides both men with a platform to open up about their experiences in combat while documenting their journeys out of the darkness through a revolutionary program championed by Save A Warrior. Over the course of one week, the men and the other veterans in their cohort face their demons head-on through a holistic regimen consisting of physical and mental challenges.

At the film’s end, its subjects have changed noticeably. The skills and approach they learned during the program has imbued them with the power to reclaim their lives and well-being. The same thing that enabled them to talk about their struggle with a journalist - that basic openness about one’s story - enabled both begin their spiritual re-awakenings.

The film’s audience has changed as well by this point. They are able to put faces to an issue often mentioned but rarely encountered by the civilian population. They have witnessed the price of the freedom they hold dear exemplified by the hardships these veterans and their families endure. Perhaps most importantly, they have been introduced to an organization building new outcomes for these people and know exactly how to support their mission. We are left more open in our recognition of their realities - and with this knowledge, we can be better for them.

There has seldom been a better time in human history for this openness to be encouraged. The emergence of blogging and social media has given veterans new avenues to share their experiences - experiences that would have remained shrouded in eras past.

These advancements do not necessarily guarantee wide exposure, however. While digital publishing has been reduced to the push of a button, the media has the unique ability to lend credibility to these accounts through their endorsement, resources and promotion, ensuring that they make their way into our newsstands and living rooms - and ultimately, our collective conscience.

As projects like “The War Comes Home” have displayed, the media’s power to help veterans and their families is tangible - and with our ongoing involvement in conflicts abroad, perpetually necessary. The communications sector must seize this opportunity to give these brave men and women exposure commensurate with their invaluable contributions to our freedom and way of life.