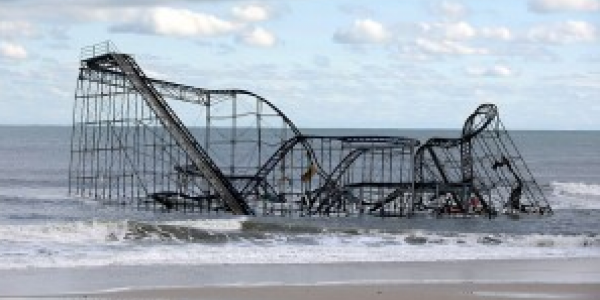 With the news industry in crisis, there's room for new realities

Posted on March 21, 2013 by The Patterson Foundation

Editor's Note: This article, written by Debbie Galant, was originally posted on the NJ News Commons blog. The Patterson Foundation is supporting business mentoring training for NJ News Commons in May.

The state of the news business is lousy.  A week after the much-revered Boston Phoenix threw in the towel that’s hardly surprising news, but a new report from the Pew Research Center’s Project for Excellence in Journalism is packed with statistics showing a weakened journalism profession that is losing reporting power, revenue and audience.

–Some 31 percent of respondents have reported deserting a news source because its quality has degenerated.

–Mobile digital display is one of the fastest-growing ad markets, but news organizations aren’t getting much of a share. Some 72 percent of that market goes to six companies, including Facebook and Google.

–Some 63 percent of the public has little or no idea of the financial pressures facing news companies.

–At CNN, which invented the 24-hour TV news cycle, the number of produced story packages was cut in half between 2007 and 2012.

One of the saddest conclusions of the report is that, with more thinly-staffed newsrooms, news organizations — and by extension their readers, listeners and viewers — are much more likely to be duped by propagandists. In a recent case, Pew said, no less a news organization than the AP fell for a fake press release. In 1980, PR professionals outnumbered journalists 1.2 to 1. By 2008, PR folk were outnumbering news folk by more than three to one.

Efforts by political and corporate entities to get their messages into news coverage are nothing new. What is different now—adding up the data and industry developments—is that news organizations are less equipped to question what is coming to them or to uncover the stories themselves, and interest groups are better equipped and have more technological tools than ever.

This isn’t just dangerous to the news business, it’s dangerous to democracy — and it’s one of the reasons the NJ News Commons exists.

We’re not going to single-handedly reverse the trends that have decimated newsrooms and made technology companies leapfrog over news companies in the ad business. But we’re trying to bring about efficiencies in the news business (Story Exchange), improve reporting by teaching more journalists data journalism (Hack Jersey), and help small news organizations learn the business skills that will help them survive (CJET). And our Learning Lunch series is all about discussing the issues of the day.

When I came to journalism, in the Woodward and Bernstein era, there was an inviolate Chinese Wall that separated journalists from the business sides of their operations, and everyone assumed this was a good thing. Now, journalists and journalism can’t afford the luxury of that detachment. Every news person should know and understand the economics of their business.

Janet Coats of the Patterson Foundation, which is sponsoring our CJET training in May, wrote a post on Friday “Business Mentoring is One Way to Beat the Hyperlocal Cooties” — a direct response to Jeff Jarvis’s post the previous week lamenting hyperlocal business failures. In her post, she discusses the first training her organization undertook, called Super Camp, which I had the honor to participate in.

In that pilot program, we sent business mentors to work with 12 publishers, mentoring them both by phone and through visits in their markets. They focused on building strength in ad sales, in customer relationship management and in diversifying revenue streams.

What’s exciting about this third iteration of the training is that it will take place within one state — affording publishers an opportunity to mentor each other when it’s all over.

Take a second to let those three words register: “mentor each other.”

We have a slogan at the top of our website: “Strengthening the voice of New Jersey by helping news organizations work cooperatively.” We really believe, given the crisis in our industry, that it’s time to put down our petty differences and shore up our profession together. Journalists will never lose their instinct to want to scoop their competitors, and some healthy competition between members of the news ecosystem is a good thing. But the real threats to us are not from other journalists. They’re from technology companies that are smarter than we are, and our own failures to reinvent ourselves fast enough.