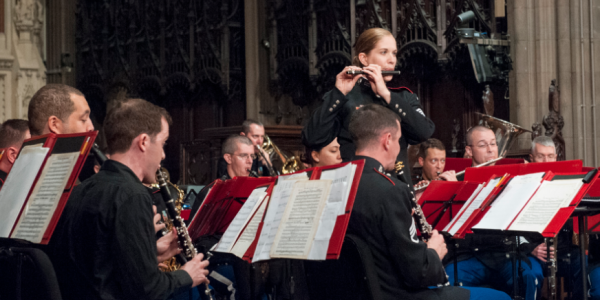 Presented by The Patterson Foundation, the Veterans Legacy Summit brings to Sarasota leaders and advocates driven to share ideas, learn about unique partnerships, challenge assumptions and push boundaries to honor veterans and their families.

As an organization, the West Point Band has similarities to The Patterson Foundation. Originally, the band was composed of a single fifer and a single drummer who were left at the Military Academy following the Revolutionary War to provide the musical timing for marching and the execution of drill and ceremony. Since that time, they have grown into one of the most capable and versatile performing groups in the world. The Patterson Foundation followed a similar growth path, working with a small collection of people and creating impact that reaches far across boundaries.

The West Point Band’s upcoming performance at the Veterans Legacy Summit’s Celebration of Service and Sacrifice will be another high point in an already illustrious history of performances. For example, the West Point Band performed at the dedication and re-dedication ceremonies of the Erie Canal; at the St. Louis, Chicago and New York World’s Fairs; Grand Central Station, the Statue of Liberty, and at the battlefield at Gettysburg; for the funerals of Ulysses S. Grant and Franklin D. Roosevelt as well as the inaugurations of numerous presidents. The Patterson Foundation is honored to have them here, and I know that their music will inspire us now just as it did when I was a cadet at the United States Military Academy.

Celebrate Service and Sacrifice (Saturday, Nov. 15) - The West Point Band will perform selections during this heartfelt and entertaining salute to the service of our veterans. Click here to register online to attend. Click here for parking restrictions.

West Point Band Community Concert (Sunday, Nov. 16) - The band is the focal point of this full-length community concert from 2-3:30 pm at Patriot Plaza. This event is FREE and OPEN to the public to attend. **Tickets are required to attend this event** Tickets are available starting Monday, Oct. 27. Limit six tickets per person while supplies last. Please visit the EVENTS area of the Patriot Plaza website for ticket locations and pick-up times.

Performance at Sarasota High School (Monday, Nov. 17) -  Just as The Patterson Foundation always creates opportunities for our community to connect through collaboration, so does the West Point Band. During their stay in Sarasota, the West Point Band will perform for students at Sarasota High School to enrich the lives of the local student population. But what really makes this outreach special is that the band will be holding breakout sessions where they offer advice and instruction to student musicians!

It has been almost 15 years since I last stood in formation at the United States Military Academy while the West Point Band triumphantly played our graduation day march. I’m beyond thrilled to have these musicians in my hometown for the Veterans Legacy Summit. Make sure you clear your calendars and don’t miss what will most certainly be an amazing concert by such a historically significant band.