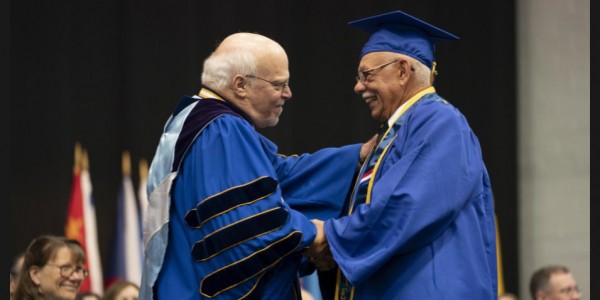 Posted on May 20, 2019 by Michael Moore Jr., Herald-Tribune Media Group

Anthony Rondello, a 73-year-old Venice resident, graduated from Hofstra University with a degree in sociology on Sunday.

When Venice’s Anthony Rondello first entered college at 17, he said he was probably a little too young.

The 73-year-old retired federal agent and veteran graduated with his bachelor’s degree in sociology on Sunday from Hofstra University — a degree he started in 1963 before leaving school to join the Army.

“Other students are on the five-year plan, but I’m on the 56-year plan,” Rondello said. “The students in the classes were young enough to be my grandchildren, and the professors were as old as my children.”

Sunday’s commencement marked the completion of a lifelong goal for Rondello, who has dreamed of revisiting the sociology degree he fell short of so many years ago, despite the fact that he enjoyed a decades-long career in the federal government. It was about three years ago, after the death of his second wife, that he decided to go back to school after his kids urged him to look into the possibility of completing his degree.

That’s when he contacted Stavros Valenti, the senior associate dean for student academic affairs at Hofstra University, as well as William Mangino, the chair of the sociology department.

“I reviewed his transcript from 1967, which was a paper document that had to be retrieved from Hofstra’s archives. We learned he was only a few credits short of earning his degree,” Mangino said in a statement.

Hofstra worked out a plan so that the Massapequa, New York, native turned Venice resident could take two of the required courses at the University of South Florida before finishing his degree at the Long-Island based institution where he started. At USF, he took a modern introductory course in order to give him an overview of the discipline as it is today compared with the 1960s. He then took a course on classic sociological theory before completing his senior capstone course at Hofstra.

He earned all A’s.

The biggest adjustment, Rondello said, was to the tech-heavy approach of today’s schooling.

“The first day I came into class, I left my iPhone and iPad and everything in the car because I didn’t want to be disruptive, and so I just showed up with a notepad and a pen. But as soon as I sat down, the other students whipped out their phones, tablets, and laptops,” Rondello said. “There were nights at 3 a.m. where I’d be working on a paper and I just wanted to throw my laptop out the window. But I live in Florida and it’s only a one-story house, so I guess it wouldn’t do much good. Still, it was frustrating at times.”

The support of his family, friends, classmates, and professors got him through the late nights and technological pitfalls, Rondello said.

Education runs strong in his family. His son, KC, is a physician who teaches graduate school at Adelphi University on Long Island, and his daughter, Deanna, is a high school counselor.

Rondello retired in 2003 from the Bureau of Alcohol, Tobacco, Firearms, and Explosives, where he was a field agent for the National Tracing Center, where he tracked firearms from the manufacturer to the buyer to help identify suspects involved in crimes. Before that, he was an auditor for the Internal Revenue Services and was a special agent criminal investigator for ATF. He also was detailed assignments to the Secret Service and State Department, where he occasionally did protection work for presidential candidates and foreign dignitaries.

All that doesn’t make homework any easier.

It did, however, prepare Rondello for the much-maligned group projects that college students love to hate.

One of the biggest differences from when he went to school in the ’60s compared with now is that it was a more “individualistic approach.” Now, classes are more likely to have you approach projects and problems with group solutions, which is “how the real world works” Rondello said.

The importance of working together as a society was further examined in his senior paper, “Ageism in America,” which explored the problem on a large scale as it relates to aging.

“Older people are living longer and are therefore being subjected to more and more discrimination, and I myself can certainly identify with this problem,” Rondello said. “If we are lucky, we are all going to get old and find ourselves in this position, so we have to figure out how to deal with it as a society. We need to collectively attempt to keep an open mind and be open to the fact that there is no constant and that things are always changing. That’s what sociology is.”

“My grandparents were much more restricted in their mental and physical capacities. This generation is very lucky. I don’t know how it happened. Last I saw it, I was basically a teenager at 17 who knew everything about everything, and next thing I know I’m graduating at 73 and planning to live forever.”