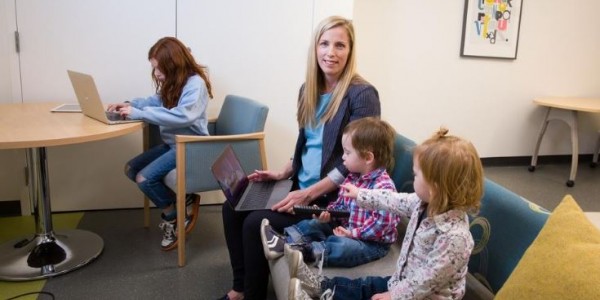 Too Much Screen Time Delays Learning

The science says too much screen time is not good for babies and toddlers, but it’s more about what they’re not doing while they’re zoned into a television or tablet.

“You can’t run until you can walk and you can’t say two words before you can say ‘mommy’ and ‘go’ independently. Development has to be practiced in order to gain a mastery of skills, and screen time is sedentary behavior,” said Sheri Madigan, assistant professor and research chair in determinants of child development at the University of Calgary, and first author of Association Between Screen Time and Children’s Performance on a Developmental Screening Test, recently published in JAMA Pediatrics.

The study is one of the first to associate increased screen time, in this case, two to three hours a day, to developmental delays in a variety of milestones.

Greater screen time at 2 years old was associated with poorer performance on developmental screening tests once the child reaches 3, and the same applied to 3-year-olds tested when they’re 5.

More than 2,000 mothers and children participated in the study.

Toddler milestones may seem trivial, but they’re the roots of learning communication, motor skills and problem-solving.

Examples include knowing to get a stool to reach the cookies on the top shelf, knowing to look for a misplaced teddy bear under a blanket, feeding themselves with a fork or recognizing themselves in the mirror -– key concepts that help kids get ready for kindergarten.

But wouldn’t such behaviors eventually be learned, regardless of how much screen time they had? “It’s possible. But what we’re seeing are disparities on account of it,” Madigan said.

While the study did not delve into how far-reaching they might be, “other research shows disparities tend to widen versus shrink, especially without intervention,” she said.

It is possible the delays may lay the groundwork for some of the gaps children face in school, making it a challenge to catch up with peers.

Children with higher levels of school readiness at 5 years old are often more successful in grade school, are more likely to finish high school and earn more as adults, according to the Brookings Institution.

Madigan’s research also revealed how commonplace screen use is, and led her to suspect parents may not be aware of its effects on early learning.

Approximately 98 percent of U.S. children up to 8 years old live in a household with an internet-connected device and, on average, spend more than two hours a day on screens, cutting into time that might be spent outdoors, reading books or playing with others.

Madigan, also a mom, added that screen time isn’t always wasted time. “If kids are watching with their parents, parents can be that bridge to connect what’s happening on the screen. ‘That’s right, that’s Elmo, he’s red, you recognize him.’ “It’s most problematic when there’s no reciprocity and it’s used as a babysitter while they’re alone,” she said. Madigan urges parents to follow the recommended American Academy of Pediatrics screen-time limit of one hour a day for young children and follow plans to reduce it, like carving out media free zones and times of the day.

As their children’s first teachers, she also urges parents to limit their own screen time.

This story comes from a partnership between the Suncoast Campaign for Grade-Level Reading and the Herald-Tribune, funded by The Patterson Foundation, to cover school readiness, attendance, summer learning, healthy readers and parent engagement. Read more stories at https://www.gradelevelreadingsuncoast.net/category/solutions-journalism-partnership/