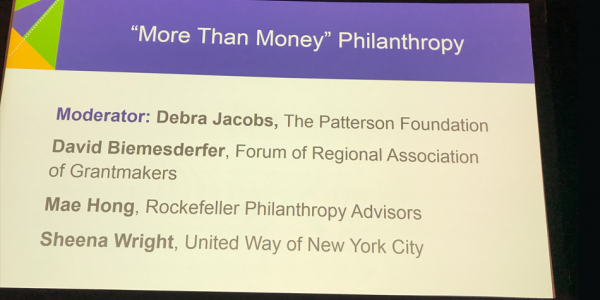 “When Is It Ever About the Money?” 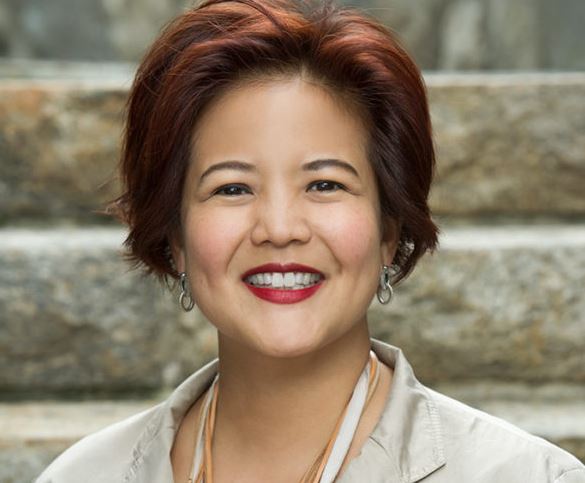 Editor’s Note: Mae Hong, Vice President of Rockefeller Philanthropy Advisors in Chicago, IL, was a panelist during the Morning Plenary - Town Hall, “More Than Money” Philanthropy, moderated by Debra Jacobs, President and CEO of The Patterson Foundation during #GLRWeek in Denver.

I was asked to speak recently to a group of foundation leaders gathered for the Campaign for Grade-Level Reading Funder Huddle on the topic of “More Than Money Philanthropy.” With 300+ funders in attendance, this was one of the largest confabs of local, state, and national funders that sup

port early learning, early literacy, and early school success, and so the idea of talking about more than the hundreds of millions of dollars that this group represented was a little daunting.

Every foundation wants to think of itself as more than an ATM or checkbook. Or more than – as the famous New Yorker cartoon once depicted foundations – a “pile of money surrounded by people who want some.” We often say foundations’ influence is more important than their affluence; or that our cache is more meaningful than our cash. My first thoughts went to the all-important triumvirate of giving time and talent in addition to our treasure. And then it hit me:

When did our philanthropy become about money in the first place? How did our dollars become a proxy to measure our love for humanity? I started doing some research on this question, scouring all the books about the history of philanthropy, and I think it started in the late 1780s in France. That’s a story for another time, so I won’t go into how I reached that conclusion here.

But prior to that period, philanthropy was never about the gift. It was about the giver. Philanthropy was about expressing a deeply held conviction that you as the giver had about how you want to show up in the world and the mark you want to leave. We were demonstrating what we believed to be our obligation to our fellow humankind. In the early traditions, it was very much about faith. Every religious tradition has philanthropy as a core tenet and practice of philanthropy as an expression of that faith. But somewhere along the line (leading up to the late 18th century in Western Europe) that changed. Philanthropy no longer became about the giver. It became about the worthiness of the recipient. That was when we started to measure our philanthropy with our dollars.

We need to adopt a different measure of our philanthropy today.

Maya Angelou, in her 1993 essay “The Sweetness of Charity,” describes philanthropy like this:

“I have found that among its other benefits, giving liberates the soul of the giver. The giver is as enriched as the recipient and more important, that intangible but very real psychic force of good in the world is increased . . . the gift is upholding the foundation of the universe . . . each boon we give strengthens the pillars of the world.”

Is there anything more compelling than believing that what we do increases the psychic force of good in the world? Upholds the foundation of the universe? Strengthens the pillars of the world? That is what “more than money” philanthropy is about. Our philanthropy is an expression of our hope. Hope is that unshakeable state, that inner state of being, about what we believe the world should look. There are fierce battles being fought today about what the world should look like, but hope is stunningly absent from those debates.

Czech writer and political dissident Vaclav Havel called hope “an orientation of the spirit, an orientation of the heart.” He said, “Hope is not the same as joy that things are going well or a willingness to invest in enterprises that are obviously headed for success. But rather, it is an ability to work for something because it is good, not because it has a chance to succeed.” If we view our philanthropy as an expression of hope (and I am paraphrasing social justice activist and lawyer Bryan Stephenson from the Equal Justice Initiative here), we can say to the world things that they don’t actually believe: “Yes, poor children and children of color can succeed in school.” We can get them to do things that they don’t actually think can be done: “Yes, communities, schools, parents, teachers, and policymakers can work together on behalf of children.” Our world desperately needs these messages today. Our world needs more declarations of hope.

I understand that for the Left-Brained folks among us, this idea may be wildly frustrating and feel – as one colleague called it – “squishy woo-woo.” However, there is now a lot of scientific research being done across different disciplines about the role of hope in cultivating innovation, creativity, resilience, business profitability, job performance, and satisfaction. So instead of trying to find ways to measure how much “more than money” we bring to the table, let’s ask ourselves a new question: Does our giving accurately express how deeply hopeful we are about this work?

Hope, as expressed through our giving, says to the world that the status quo is unacceptable. It says that change is possible. We feed each other’s hope when we come together. That is why gatherings like the Funders’ Huddle are so important. They turn up the volume on that song. In our coming together to feed and amplify our hope, we are, in effect, creating what I see as “Meta-Mission.” Meta is the Greek prefix meaning “above and beyond.” We bring all our individual missions into the room, but what comes out of that room afterward is a wholly new, transcendent mission that pulls our eyes upward in ways we could not have imagined on our own. This is not more than money. It is the money.