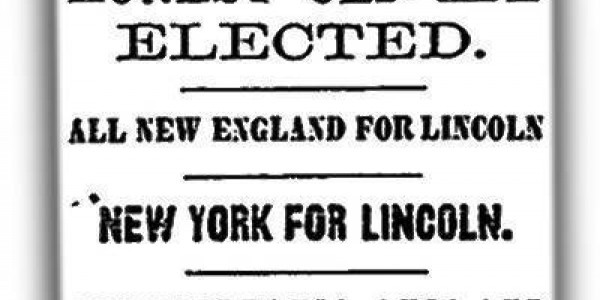 The Patterson Foundation is the result of one terminus of a long family line of Abraham Lincoln supporters. In fact, there is considerable evidence to support the assertion that Mr. Lincoln only ascended to his position as President of these United States because of the political and social support he received from Joseph Medill and his Chicago Tribune Newspaper.

On May 29th, 1856, Medill observed Lincoln giving a speech at an Illinois Republicans organizing convention and remarked, “It was the greatest speech finally to which he (Medill) ever listened. He said that at times Lincoln seemed to reach up into the clouds and take out the thunderbolts." So began an impassioned friendship that would last through senatorial races, presidential elections, and the bloodiest war in our history.

Abraham Lincoln leaned heavily on Medill and his paper during his run for the U.S. Senate and the Presidency. Medill offered constant support and assistance through the wording of questions during debates and in speech preparation. Specifically, Medill was the final reviewer of Mr. Lincoln’s remarks before the Freeport Debate against Senator Stephen Douglas. His insight and recommendations contributed to a result that actually enabled Sen. Douglas to win his re-election to U.S. Senate but ultimately doomed his run at the U.S. Presidency.

As an avid Republican, a pure abolitionist, and a total believer in the Union, Medill was frequently spurring a normally calm Lincoln to more aggressive and flagrant rhetoric. As an example, Mr. Medill often urged statements like, “Put in a few ugly questions,” “Don’t act on the defensive,” and “Hold Dug (Stephen Douglas) up as a traitor and conspirator a proslavery bamboozling demagogue.”

During the run for the Presidency in 1860, Medill played an essential role in converting Ohioan Salmon Chase’s supporters to Abraham Lincoln’s camp and securing the Republican nomination. He furtively used his press to influence public opinion and his editors wrote about Lincoln’s grandness from every possible angle. Medill claimed that at the decisive point in the election he personally moved over and sat amongst the Ohio delegation to influence their voting and ensure that Lincoln received the full margin of victory.

The supportive relationship continued after President Lincoln’s election and to the precipice of civil war. When Fort Sumter was bombarded in April of 1861, Joseph Medill wrote Lincoln the following encouragement:

“The North West will back you with their last man dollar and bushel of corn. The authority of the Govt. must be made good. Do your duty; the people are with you.”

But it wasn’t always Medill spurring on Lincoln as was the case in 1864 when Medill attempted to request relief for Illinois from the draft requirements for the Union Army. In this powerful exchange Lincoln, a powerful statesman and orator chided him, "And you, Medill, are acting like a coward. You and your Tribune have had more influence than any paper in the Northwest in making this war. You can influence great masses, and yet you cry to be spared at a moment when the cause is suffering. Go home and send us those men."

While Abraham Lincoln is remembered for his dedication to a unified nation and the abolition of slavery, it is essential to realize that these noble ideals could not carry themselves. Truly it was the networking, connective support, and desire to work with partners toward common goals that elevated this man from pure idealist to functional harbinger.

To stay true to its past, The Patterson Foundation connects with others today to empower and enable social change. I know this legacy of enlightened action is stronger than ever in our community, and I am proud to be a part of this force for positive change.