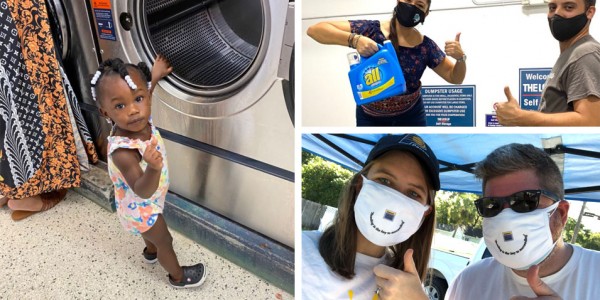 Posted on November 09, 2020 by Beth Duda, director of the Suncoast Campaign for Grade-Level Reading

Editor's Note: All names have been changed to protect personal privacy.

The Suncoast Campaign for Grade-Level Reading (SCGLR) just completed a Pop-Up Neighbor through Laundry event in Sarasota County. Without any advance notice, The Patterson Foundation surprised everyone who came into the SuperMatt Laundromat on Saturday morning by generously covering all of the laundry fees for the forty-three families that came, unaware. Simultaneously, SCGLR shared free books with all the children. In total, 419 loads were washed, dried, and folded, a remarkable accomplishment. But the total number of laundry loads isn't the big story. The big story is unexpected happiness and joy.

I've always heard the adage, "Money can't buy happiness," but the experiences we've had with people we've met at Pop-Up Neighbor through Laundry events prove that a handful of quarters can indeed generate happiness and joy.

Take Shirley. Shirley arrived in a battered older-model car brimming with unwashed laundry. I met her in the parking lot and shared the good news that the Pop-Up Neighbor through Laundry event had just begun. She said, "Oh, you are not going to want to help me. I have too much laundry to do. My whole car is full of dirty clothes." As some of the SCGLR volunteers helped Shirley unload the laundry from her trunk, backseat, wheel wells, and front passenger seat, I assured her that her laundry fees were covered thanks to The Patterson Foundation.

Shirley said, "I just can't believe this. This is unbelievable. It's been rough. Since the COVID, my three grown children have come home, and some of them has brought their kids." She reported that they were making due until about ten days ago, when her washing machine malfunctioned, flooding the entire first floor of their home. She had everyone's laundry in her car and all of the throw rugs that got soaked in the flood. She also had the towels they used to sop up the water and many sets of sheets and blankets. Shirley said she had been feeling down, like the unluckiest person until she saw us this morning. Then she just knew that the angels were taking care of her.

Laura told me she was inspired by the kindness "bouncing around the laundromat." She planned on stopping at a fast-food restaurant on the way home and paying for her meal and the meal for the car behind her. "This made me feel so good. I want to do the same for somebody else."

Food was also on the mind of Frannie. "What am I going to do with the money I saved today? Well, my grandkids hasn't had meat in about two weeks, so I'm going to march right over to Walmart and buy as much chicken as I can afford." Her excitement made that chicken sound like the most delicious food on the planet!

"I'm gonna buy my kids some Christmas presents," said Keisha, with a twinkle in her eye. "I've been real worried about how I'm going to swing Christmas with things being as bad as they are. I'm going to go get a couple things today. I can breathe easier knowing there will be something under the tree."

Lynnie had a different kind of holiday celebration in mind. She shared that one of her grandkids hadn't had a birthday cake in a couple of years. She was very excited to go buy a small cake they could all enjoy.

Robin was delighted by the surprise of Pop-Up Neighbor through Laundry and equally excited by the opportunity to take a book for her kids. Robin is a preschool teacher working on getting her degree from State College of Florida. She is currently working at the same preschool she attended as a child, working with two-year-olds. "They love it when I read them books, especially new books!"

There were two other college students in the laundromat during the Pop-Up event, both of them appreciative when they heard their laundry fees would be paid. Leo is a New College student who prefers being in the community rather than doing his laundry at school. Ashlin is just about to start her studies as a medical technician as the first step in realizing her aspiration of becoming an RN.

Luis, an older gentleman, shook his head every time he saw me and said aloud, "This is nice, real nice." We both laughed joyfully as I said it in unison with him the third or fourth time around. He asked me to tell him a little bit more about where I work. I told him about The Patterson Foundation's emphasis on strengthening the efforts of people, organizations, and communities. He replied, "It makes me feel good to know there is so much good in the world."

My colleagues had similar experiences today. Kelli Karen Smith shares, "Several times today I had women thanking God each time I put the quarters in the machines. We had several "shouts" throughout the day. A shout is a happy dance for a blessing. Another woman said to me, "I'm going to keep saying thank you because you have no idea what this means. I won't have to do laundry for weeks!" At one point, I was in an area with over five women lifting clothes in and out of machines. I said, "So, this is where all of the beautiful women are on Saturday morning." They immediately stopped, looked up, and started strutting. I know they were beaming inside."

So, there you have it, a morning in the laundromat with hands full of quarters is transformed into hearts full of joy.