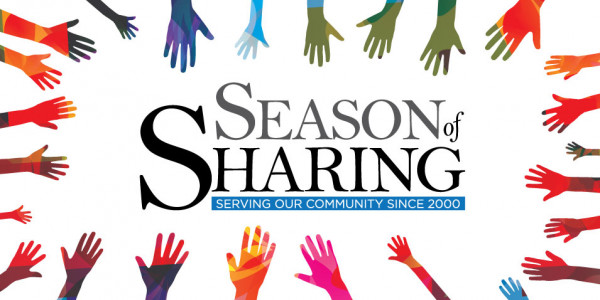 The Patterson Foundation Strengthens Season of Sharing for 2022–2023

Season of Sharing is a longstanding, vital safety net for residents of Charlotte, DeSoto, Manatee, and Sarasota counties experiencing acute need. The fund offers residents one-time financial assistance for basic living expenses such as rent or mortgage, utilities, transportation, or childcare. Since its inception in 2000, Season of Sharing has raised and distributed more than $34 million, benefiting more than 41,000 households.

“Season of Sharing truly is an opportunity for caring people to help their neighbors in their hour of need,” said Roxie Jerde, President and CEO of the Community Foundation of Sarasota County. “It really empowers anyone with a desire to help, and our communities’ unique generous spirit has enabled so many people to get through what could otherwise be a major crisis.”

Jerde notes that more than 90 percent of those requesting money do not reapply, suggesting that the incident causing the crisis has been overcome, allowing recipients to resume their lives with less damaging interruption.

While donations are collected for Season of Sharing with an emphasis on the fund drive from November through January, money is distributed throughout the year to residents in need. The Community Foundation works with a network of human service agencies with caseworkers who oversee individual requests and fund disbursement.

Recently, the Season of Sharing fund has been an invaluable resource for individual adults and families displaced by Hurricane Ian. As the ripple effects of the storm become revealed, causing unanticipated expenses and lapses in employment for our residents, the Community Foundation expects a continued uptick in applicants. This is in addition to the Suncoast Disaster Recovery Fund, which is managed by the Community Foundation to identify and support longer-term solutions revealed by Hurricane Ian, such as energy sustainability, healthcare, and other needs currently being evaluated.

“Since 2010, The Patterson Foundation has joined donors near and far to provide one-time emergency funding to families,” said Jacobs. “Our challenge match is driven by our steadfast faith in this committed and caring community of givers of all abilities who want to help their neighbors in need.”

The generosity of the Suncoast has been demonstrated through the number of people giving to the fund, with nearly 55,000 individual gifts given since its inception. It is an immediate and flexible funding source for those in crisis and remains local. With no administrative fees, 100 percent of money raised goes directly to those in need.

The Sarasota Herald-Tribune is the Community Foundation’s media partner for Season of Sharing, reporting and sharing stories of those whose lives were able to rebound after emergencies thanks to the mitigating impact of the fund.

“Telling the stories of people who have been helped by Season of Sharing illustrates the real-life effects of some of the biggest issues affecting our community, such as affordable housing and lack of transportation,” said Jennifer Orsi, Executive Editor of the Herald-Tribune. “Those stories also show that with a simple act of giving, we can help our neighbors get back on their feet after a setback.”

Visit the Community Foundation of Sarasota County to learn more and donate.