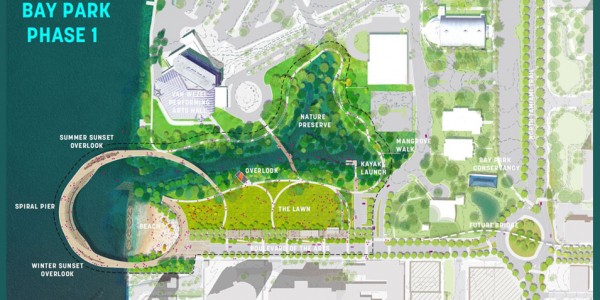 The Patterson Foundation Invests $5 Million Into The Bay's Evolution

Posted on May 21, 2019 by Debra Jacobs, president and CEO of The Patterson Foundation
Since 2016, The Patterson Foundation has supported the community in imagining the possibilities for 53 acres of the city’s most precious land on Sarasota’s bayfront known as The Bay with $300,000 in catalytic funding and consulting support benefiting the formation and work of the Sarasota Bayfront Planning Organization (SBPO) from the inception of its inclusive master-planning phase onward.

Deep community conversations, thoughtful design, and inspired leadership led to the creation of a master plan for this ambitious, long-term vision, which was approved by the Sarasota City Commission in September 2018.

In January 2019, the SBPO evolved into the Bay Park Conservancy
(BPC) to work with the City of Sarasota to create, co-fund, build and operate this open space for the community.

To catalyze BPC as an organization and undergird its demonstrated commitment to transparency, accountability, and excellence, The Patterson Foundation is supporting BPC’s process with up to $5 million for operations and Phase 1 of the master plan, which will bring the first round of enhancements to the space and result in the creation of a 10-acre community park stretching from U.S. 41 to the bayfront along Boulevard of the Arts.

This $5 million investment includes:
At a time when several large-scale nonprofit community enhancements are underway, why focus on The Bay?
This emphasis on short- and long-term considerations reflects The Patterson Foundation’s continued broad spectrum of support for The Bay’s evolution. The additional support will boost The Bay’s capacity to realize the transformative potential of the community’s vision and create new public amenities — tangibly demonstrating the possibilities for a public park that is free, open and welcoming to our diverse region while offering fitness, health, cultural, recreational, and educational activities, and events.