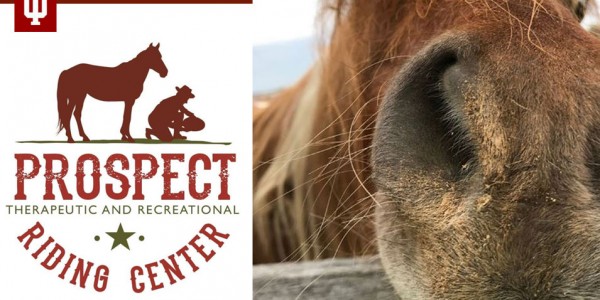 The Future of the Philanthropic Sector Spring Course: Reflections from Lucy Hauser

Posted on April 24, 2020 by Lucy Hauser, experiential learning with The Patterson Foundation

Editor's Note: The Indiana University Lilly Family School of Philanthropy and The Patterson Foundation are partnering on "The Future of the Philanthropic Sector," a special topics course for the school's students during the spring 2020 semester. The course has connected students to The Patterson Foundation's innovative approach to philanthropy and nonprofits in the Sarasota area engaged in the foundation's initiatives through interactive online experiences.

Susan Tambone founded the Prospect Riding Center in 2011 in Myakka City, Florida. The center officially became registered as a 501(c)(3) in 2013, and quickly became known for its effective horseback-riding therapy. Prospect Riding Center's mission statement is focused on valuing diversity and encouraging respect as well as "teaching persistence, patience, and courage through natural interactions with horses." Most of its clients come to the center to work on physical, developmental, or psychological conditions. A characteristic that makes Prospect Riding unique is its ability to work with clients of all ages. From young children to retirees, Prospect Riding's practices can be effective for anyone.

For the 2020 Giving Challenge, Prospect's main goal was to gain a social media presence and engage its followers. Luckily, it had already established a presence on Facebook, with many loyal donors and supporters engaging with it on that platform. An important aspect of Facebook is its 'groups:' people brought together by a common characteristic, hobby, or background. Prospect had been incorporated into local and national groups centered around the conditions that it works with, such as down syndrome, autism, and PTSD. Being a part of these groups gave it massive exposure to potential clients and donors. With the approaching 2020 Giving Challenge, we decided to build off of Prospect's Facebook platform and introduce it to Instagram and Twitter. Since it had already accomplished a loyal following on Facebook, we needed to incorporate its tactics along with new strategies to promote the 2020 Giving Challenge on the other platforms. Our team strategized to come up with a two-week social media plan for Prospect to post on all three platforms to both promote why donors should give to Prospect Riding Center and how they can give during the 2020 Giving Challenge.

We started by developing a three-day pattern to maintain a schedule on all three platforms. For two days, the center will focus on posting about why donors should donate to Prospect specifically. These posts will center around volunteers, activities, and aspects that make Prospect unique and a vital part of its community. Our ideas included volunteer introductions, tours of the grounds, horse facts, and content to make the viewer feel a part of the team. For the third day, Prospect will post about how interested donors can give in the 2020 Giving Challenge. These posts will include the Giving Challenge logo, dates, and links that make donating as easy as possible. With generations that have grown up with social media, accessibility, and ease, this is extremely important when asking young donors to give. They want to be able to click a few links and be done – not go through a long, drawn-out process.

With this two-week plan, Prospect Riding will effectively engage its audience while guiding them toward becoming active donors. Over the course of working with Prospect, it became clear just how vital it is to its clients and community. The funds raised in the 2020 Giving Challenge will give Prospect Riding Center the ability to broadcast its mission and attract more potential clients and donors.