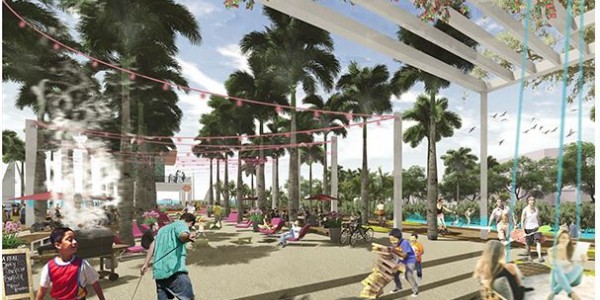 An Era of “Dreamers and Doers”

Editor’s Note: The Patterson Foundation was the catalyst funder with its initial $100,000 donation followed by matches for a total of $300,000 invested in supporting the master-planning process.

If communities can earn themes for eras, then I suggest that Sarasota County, specifically the City of Sarasota, can claim the mid- to late-2010s as an era of “Dreamers and Doers.” One master plan, in particular, best illustrates this theme.

Sarasota boasts one of the most remarkable publicly-owned bayfront sites in the country, even the world. Fifty-three acres with 2,400 linear feet of shoreline currently house the Van Wezel Performing Arts Hall, the Sarasota Orchestra, Municipal Auditorium, the City’s original Garden Club, and other civic spaces. In its current condition, the site is over 59% impervious surface, with most buildings’ backsides facing jaw-dropping water views. While what happens inside of these buildings might be remarkable, years of disjointed improvements have rendered the site itself about as unremarkable as it could get.

Community dreamers, over five years ago, saw the potential of this site and set out to create a process that reflected what the community felt the area deserved. Bayfront 20/20 (the original “Dreamers”), a collection of civic, neighborhoods, business, cultural and educational stakeholders, began a multi-year, community-wide conversation that resulted in an adopted vision for the property, and guiding principles under which a master plan would be designed.

The adopted vision is to create a long-term master plan for the Sarasota Bayfront area that will establish a cultural and economic legacy for the region while ensuring open, public access to the Bayfront.

Both the vision and guiding principles were adopted in 2017 by the City Commission.

Bayfront 20/20 was succeeded by “The Doers,” the nine-member Sarasota Bayfront Planning Organization (SBPO), whose role was to produce for the citizens a master plan reflecting the aspirations of the community, the vision, and guiding principles. Equally as important, the SBPO committed to creating a plan that would also be economically feasible, financially sustainable, and operationally doable.

The SBPO committed to transparency and community-wide engagement. It aspired to engage the best-fitting master planning team in the world for this project. This effort was funded without one penny of government money. More than 1/3 of the $2.1 million raised was provided by area foundations whose financial leadership kicked off the successful fundraising effort. Individual philanthropists provided the remaining funds.

Boston’s master planning and design firm, Sasaki, was selected from an international pool of over 25 design teams who submitted for consideration. Once contracted, Sasaki began with its first and most important task: to learn who we citizens are, what we hold as uniquely important to us, what we felt was missing from our recreational community, and what we dreamed for the site.

In nearly a year, we conducted more than 175 forums and meetings, virtual presentations, visits to schools, after-school programs, community centers, and neighborhood meetings, producing a contact list of nearly 50,000 people, all of whom provided collective input into our site, now rebranded as “The Bay.”

From this feedback, the community declared its collective aspirations:
A blue and green oasis that is connected and accessible for all
An enlivened destination that also reflects cultural vitality
A destination for economic and environmental sustainability

What was different from this process and prior attempts by the City to design this site is that it was not a brainchild of government. It was not the creation of a brilliant but isolated design team who failed to learn who we citizens are. The final master plan produced by the Dreamers and Doers translated Sarasota’s collective voice into a plan that was ultimately approved by the City of Commission of Sarasota on September 6, 2018.

The City does not have a parks department large enough to implement or manage such an aspirational project, so the approval also included the creation of a land conservancy to fundraise, build, and manage the master plan and its operations. A Memorandum of Agreement for such is currently being finalized.

Funding of the conservancy depended upon a financially viable Phase 1 that will not only answer the collective community aspirations but demonstrate to the community that we can have such viable aspirations, we can imagine and design unique community assets, and that we are worthy of a bayfront site this remarkable. Phase 1, also approved by the City, answers each of the declared aspirations: a blue and green oasis that is active and accessible and financially viable. Design for Phase 1 has begun, with hopes of groundbreaking in 2019.

We were somewhat surprised at how “connectivity” was the most vocal theme we heard. US 41, which fronts the entire eastern border of the site, is about as challenging to cross as a roadway gets. Phase 1 will include working with the Florida Department of Transportation with aspirations of a safe and attractive pedestrian walkover that will connect The Bay with tens of thousands of city residents. This master planning effort will create productive and positive working relationships with various local, state, and federal governmental agencies who, too, have goals in their organizations that complement our adopted plan.

We feel it is quite remarkable that dreams for a beloved property ultimately translated into a plan that was directed by the aspirations of the community. The era of Sarasota’s Dreamers and Doers will continue to mark successes in implementing the full master plan over the next decade.