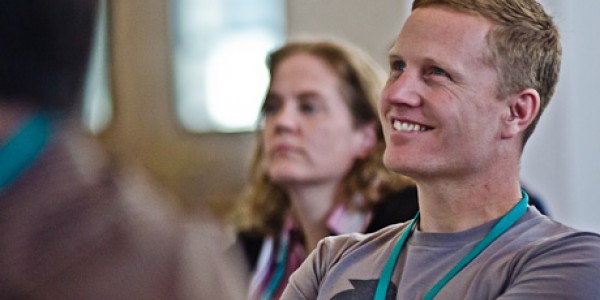 I just keep looking at the photos.

It’s been a week now since the Block by Block Community News Summit ended. I’ve read through all the synopsis of the Block by Block sessions, a mountain of tweets, some news coverage and lots of Facebook posts. But it is the pictures taken by Batavian publisher Howard Owens of the publishers – deep in thought, animated in conversation – that keep drawing me back.

And making me smile.

Something about this year’s Block by Block has had that effect on me. During the Chicago sessions, Michele McLellan and I kept looking at each other and grinning. In May 2010, Michele and I sat down together in the lobby of a Hampton Inn in Columbia, Mo., and talked about the need to bring the local, independent news publishers she had been researching together in real life.

We had no idea what to expect when, just four months later, the first Block by Block Community News Summit convened at Loyola University in Chicago. What we got was nothing short of amazing.

I went back to look at my blog posts from the first and second Block by Block summits. Here’s what I said in 2010:

“Here’s what made it great,’’ I wrote. “ A room filled with journalism entrepreneurs, people working to both inform communities and unite them, standing up with incredible humility and talking about what they wanted to learn and what they thought they could share.

“That’s what journalism should be about: sharing. It’s a beautiful thing to see these folks, who are shaping journalism’s future, reject the old models of competition to help each other gain momentum in this vital work.’

“There is a growing sense of confidence among the publishers. They’ve built community news sites and survived during the worst recession of our lives, filling local information needs even as traditional media shrink in so many communities. These publishers are focused intensely on the how questions: How do I best serve my community? How do I build a business that will sustain my mission as a news and information provider?’’

Part of what made me smile this year is seeing that sense of confidence really begin to bloom. After three Block by Block conferences, these publishers no longer have an identity crisis. They aren’t on the defensive about their role in the news and information ecosystem. They embrace the fact that they are both journalist and businessperson, and they are deeply engaged in the work of pursuing paths that will sustain their work.

Those paths are far from easy, but I got no sense of the fear that was palpable at the first summit. These publishers understand that their work has value, and they are determined to build both business and content models that recognize that.

This year’s Block by Block was the last one that The Patterson Foundation will help enable. We’ve made no secret from the beginning that we saw our support not as sustaining the conference indefinitely but as an accelerant to helping the publishers build enough connection to take over this work themselves.

Just as the path for sustaining their own businesses isn’t easy, building the next Block by Block Community News Summit won’t be a simple task. But unlike our starting point in 2010, this community now has a whole network of friends to draw on, from universities to journalism funders to vendors who want to reach local independent publishers with their products.

But the most important network is the publishers themselves. There is no question that some of the innocence of the first Block by Block – when publishers were just so happy to connect with other people who were trying to build local news sites on their own – has faded. It is easier now to see the differences among them – in financial models, in content, in the very definition of what is local – than it was when we first came together.

As an outsider to their world, a friend who is pulling for their success, I remain drawn by the sense of sharing that seemed so remarkable to me at the first Block by Block. I had come from the world of old media, a world driven by competitive spirit that had kept newspapers from working together in ways that could have benefitted everyone. What I loved from the beginning about the Block by Block publishers is that they believed in supporting each other, that the success of one of them truly was a shared success.

So my hope for these publishers, as they grow in confidence and experience, is that they will focus on what unites them: A belief in local, independently produced news and information by people who care about the communities they serve. That kind of sharing truly is what journalism should be about.