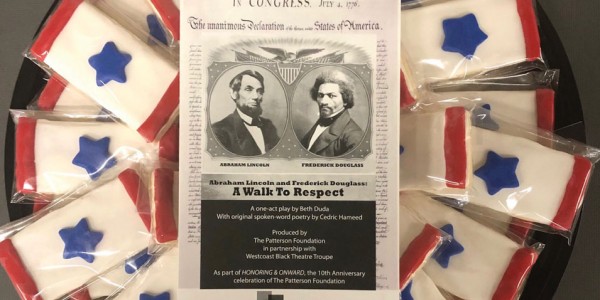 Posted on February 27, 2020 by Beth Duda, director of the Suncoast Campaign for Grade-Level Reading

Involvement with an initiative at The Patterson Foundation often includes references to sharing cookies. This phrase exemplifies The Patterson Foundation's belief in the power of learning and sharing. As Debra Jacobs, president and CEO of The Patterson Foundation, shared recently in SCENE magazine, "We believe that the learnings we acquire through our work in philanthropy are like cookies — ones that are best shared with others who stand to benefit from them, rather than keeping them stuffed in a closed jar (and who doesn't like being offered a cookie now and then?). Creating opportunities to open and share the jar with those who are working in the same space toward the same aspirations can help inform and catalyze efforts. We know that every person, organization, and community has cookie jars, and we benefit when we all share nuggets of wisdom and experience."

The recent production of staged readings of the new one-act play, Abraham Lincoln & Frederick Douglass, a Walk to Respect, gave us many opportunities to see the power of sharing. I am credited with being the playwright of this one-act play, but as is true in most theatrical productions, this piece came to life because of the creativity and collaborations of many people.

First, the two subjects of the play, Abraham Lincoln and Frederick Douglass—played by Michael Krebs and Joel PE King—set powerful examples of the importance of communicating with and listening to people with opinions and beliefs that are different from our own. Sharing their "cookies" led both of them to a greater understanding and resulted in a friendship built on mutual respect.

From the first inkling that telling this story might be a meaningful way of celebrating TPF's 10th anniversary, the play grew in strength because of several influencers, educators, and other artists who were willing to share their cookies — including Debra, numerous historians, Westcoast Black Theatre Troupe, spoken word poet Cedric Hameed, Michael Krebs, Joel PE King, and others.

The audiences provided another powerful example of cookie sharing—some metaphorically as they participated freely in the robust talkbacks that occurred after each performance, and others, like the audience at Manatee Community Foundation, who took their cookie sharing quite literally. The Patterson Foundation provided red, white, and blue frosted sugar cookies to enjoy as a snack following the show. Inspired by the example set by Lincoln & Douglass, guests took two, three, or in some cases, four cookies pledging to share the extra cookies with people they didn't know well or haven't recently spoken to.

Abraham Lincoln & Frederick Douglass, a Walk to Respect, provided a new way for The Patterson Foundation to promote and exemplify relationship-building, beginning with connecting, learning, and sharing to discover shared aspirations. The entire experience was quite joyful, and I am experiencing a bit of extra joy as I imagine all of the audience members from Manatee Community Foundation spreading the important lesson of sharing our cookies by actually sharing cookies.