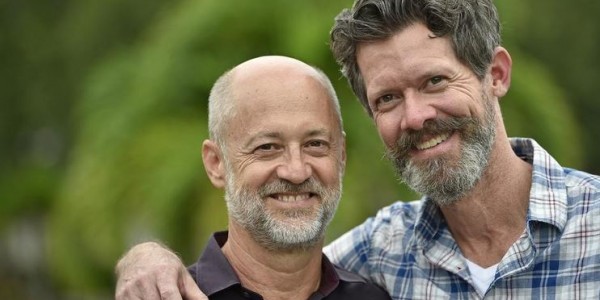 Services for Older LBGTQ People Are Few and Far Between. In Sarasota, There Is Hope

Friendship Centers in Sarasota hosts one of the only LGBTQ grief and support groups for older people in Southwest Florida.

When Michael Cochrane’s husband, Ron, was diagnosed with Alzheimer’s disease, Ron’s family and friends ran. Michael spent the last 11 years alone, changing soiled bedsheets, spooning meals into Ron’s mouth and waiting for the love of his life to die.

Sitting near him at the Friendship Centers library in Sarasota is Susan Sanderson. Her wife, Marie, lost a long, complicated battle with cancer a year ago, leaving Susan with a closet full of Marie’s clothes and a lifetime of memories she didn’t know what to do with.

She needed help but didn’t think grief and support groups would accept her grief as legitimate.

As the number of older Americans continues to rise nationwide, few are addressing or preparing for the unique needs of LBGTQ older adults, who experience additional barriers to health care and bereavement services.

Some progress in that effort can be found at the Friendship Centers in Sarasota, which hosts one of the only LGBTQ grief and support groups in Southwest Florida.

That’s where Michael, Susan, and a handful of others have found a small network of support every Tuesday for almost two years.

The nine-member group is mostly men gathered in a circle of padded chairs at the Friendship Centers’ library. The youngest is 55. The oldest is 75. There are a few women, too.

Most lost spouses, friends or family members. Then there are the exceptions, like Michael, whose husband is incognizant and living in a memory care unit in Sarasota.

“The definition of loss is very broad,” said Jeffrey Frank, a local psychotherapist who facilitates the meetings.

Frank, along with Robert Rogers, co-founded the LBGTQ grief and support group almost two years ago.

Rogers, the Friendship Centers director of community outreach, created the group after three gay men called him in a week, looking for support after losing longtime partners.

“They felt completely lost and needed a place to share their stories,” said Rogers. “I was shocked that there was nowhere for them to do that.”

It is estimated that there around 3 million people in the U.S. who are LBGTQ and over 50, and that number is expected to grow.

They are less likely to have children, twice as likely to live alone, and far more likely to continue to face discrimination and social stigma, according to SAGE, a national LGBTQ resource center and advocacy group for older Americans.

For every $100 awarded by U.S. philanthropic foundations, only 28 cents supported LGBTQ issues such as teen suicide programs, support groups, homelessness, and human trafficking prevention, according to Funders for LGBTQ Issue’s latest grantmaking and foundation report.

Programs for older adults receive only 2% of that funding.

The Sarasota LBGTQ grief and support group, as well as a monthly discussion group, receives no funding but is supported by the Friendship Centers. The nonprofit’s more than 25 programs are funded by private donations, grants, and membership fees.

“As we become more accepted in society, we’ve lost that cultural hub we had when we could only be open in gay bars,” Sanderson said. “There is little reason to come together for a common goal anymore. This group gives that back and allows us to spill our guts to people we feel connected to on a deeper level.”