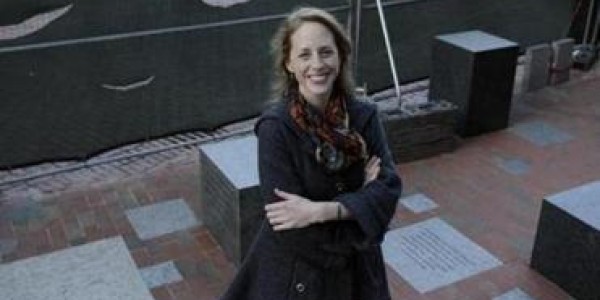 Four artists have received commissions to create original art for Patriot Plaza, a 2,800-seat ceremonial amphitheater at Sarasota National Cemetery. At this time, they are all hard at work at the complicated tasks of turning their design concepts into the art. In this series of blog posts, The Patterson Foundation introduces these talented people.

Ann Hirsch is soft-spoken, gentle, and exudes a sense of calm. Her art displays a similar restraint –but do not be fooled. Beneath the cool, calm surface of her sculptures is a strong, emotional energy that makes each piece – from a few inches tall to 7 feet, a compelling experience.

Ann works in the long tradition of western figurative sculpture but expresses her themes in a contemporary mode – seamlessly making work that seems both traditional and modern at the same time. She is interested in the public’s interaction with her work, often setting sculptures low where they can be touched and examined closely.

Her work on the east entrance to Patriot Plaza is a transitional space between the cemetery at large and the side of the ceremonial amphitheater dedicated to themes of family and community that honor military service.

Ann, who lives near Cambridge, maintains a large studio in a former factory building that houses more than 100 artists. The studio is filled with bits and pieces of experiments in clay -- heads, feet and other parts of large completed pieces. There is a series of dioramas she has been working on, each a tiny room with a mysterious human figure that suggests a private drama. In the center, on a stand, is a pair of eagles nearly three feet tall, sculpted in wax, almost ready to be cast in bronze for inclusion in her wall sculpture for the east entrance of Patriot Plaza. Her subject is usually people – and aspects of being human. However, she confided that she has always had a fascination with birds and even did a series of very small heads in which she imagined what a person would look like if they were a particular kind of bird.

Ann grew up in northern New Jersey just outside of New York City and began drawing at age 7. Encouraged by her mother, she earned a bachelor's degree in Art History with a specialization in Italian Renaissance at Barnard College, Columbia University. During her 14 years in New York, she also earned two graduate degrees, including an MA at New York University and an MFA at the New York Academy of Art. Like artists for hundreds of years before her, Ann also trained under the tutelage of working sculptors, especially Leonid Lerman; learned to do conservation and repair of Renaissance sculptures, and, in a contemporary twist, worked for an action figure company. She teaches at Rhode Island School of Design in Providence and at Lesley University in Boston.

She has several public sculptures installed in the Boston area. Her latest project – a life-size tribute to Bill Russell, the famous Boston Celtics basketball player and human rights activist, was recently installed in the plaza in front of City Hall. President Obama, on a trip to Boston to speak at nearby Faneuil Hall, made a special side trip to view the piece, accompanied by Bill Russell.  Ann was beyond thrilled to be invited to personally show her work to the President.