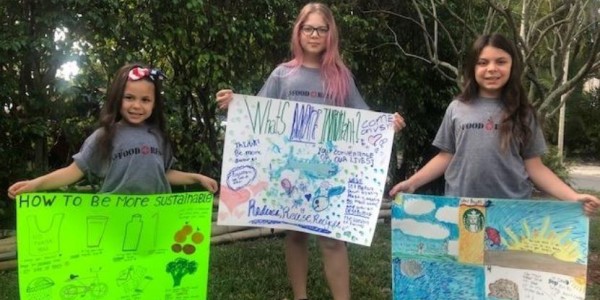 Posted on June 03, 2019 by Kim Doleatto, Herald-Tribune Media Group
If the cashier threw almost half your groceries in the trash at checkout, it might be more efficient than carting them home since nationwide, the U.S. Department of Agriculture (USDA) estimates 30-40% of all food goes to waste.

In school cafeterias, it’s much the same.

With often just 30 minutes set aside to eat and a system that urges cafeteria staff to place certain food items, like fruits and vegetables, on trays whether they’re requested or not, it’s a given.

“One billion food items are wasted annually in U.S. schools. It’s not the worst problem in the world, but it’s one with a solution, and I think the next generation is the one to make the change,” he said.

More than 800 schools have adopted K-12 Food Rescue strategies but Williamson, its founder and president, doesn’t actually manage any of the programs. That’s up to the kids.

The nonprofit’s mission is advocacy and education. It serves as an online toolkit to get things started and keep them rolling.

One year ago, Sabrina Navarra, ten at the time, often stood in the car line at Virginia Shuman Young Montessori Elementary clutching a fellow student’s unwanted apple in one hand and abandoned fruit cup in the other. It upset her to see all that good food go to the trash while it could help stanch hunger, she said.

According to No Kid Hungry, one in six children nationwide are food insecure, meaning they live in households where they get smaller portions than they need, or parents aren’t able to afford nutritious foods.

Now, with the help of her sister Valentina and their mother, Navarra’s school has a share table in the cafeteria and runs a donation program to benefit a food pantry in their community.

With almost 800 students at the Broward County school, at least 200 unopened items like yogurt, graham crackers, cheese sticks, milk, and unpeeled fruits a day are redirected from landfills. It’s a welcome change for the food pantry since “it’s different than what they’re used to getting,” Navarra’s mother said.

The program has empowered and educated students about the effects of food waste on the environment and how each person at any age can have an impact. It also created more hands-on opportunities for parent engagement, proven to strengthen school and family relationships and even increase their child’s grades.

But despite the multiple wins for all involved in rescuing food, and the fact that both the Environmental Protection Agency and USDA encourage it, some states like Connecticut and North Carolina push back by claiming food safety concerns.

“Despite guidelines, they have irrational fears. Some local health departments try to kill a mosquito with a machine gun while kids go hungry,” Williamson said.

But he’s confident it’s just a matter of time before the #foodisnottrash movement spreads.

“When children become knowledgeable about these issues, they can change a whole generation. Let them be the messengers and let’s empower them to lead,” he said.