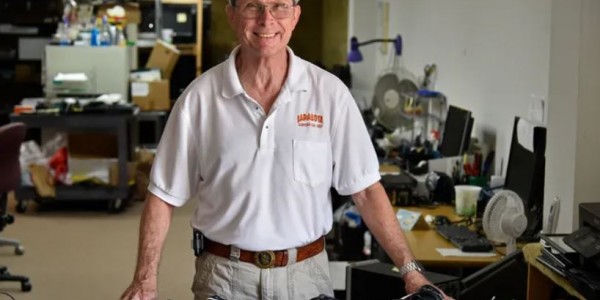 Mike Hutchinson and other volunteers at the Suncoast Technology Users Group are accustomed to turning old technology into problems solved.

But now, they face a new problem: not enough technology to circulate back into the community.

The Sarasota-based nonprofit refurbishes and donates roughly 1,200 computers to people in need every year. This year, STUG has donated roughly half as many due to low numbers of requests and donations.

Hutchinson says that schools, businesses, and nonprofits are usually the organization's biggest hardware contributors. But as more students and families become reliant on their computers to learn and work from home, those contributions have slowed.

According to data from the U.S. Census Bureau's American Community Survey, roughly 10% of households in Sarasota and Manatee counties did not have a computer between 2014 and 2018.

"We have people who come in here, and all they've had is a phone. Now, they want to move to a computer, and they're computer illiterate," Hutchinson said. "If you're going into a work environment or college, you need a laptop or a desktop."

STUG's refurbishing group accepts laptop and desktop computers – on both Windows and Apple platforms – as well as monitors, tablets, hard drives, and CD/DVD readers and writers.

It is also seeking webcams, microphones, and WiFi hotspots to accommodate the rising demand because of online schooling and remote working.

"We didn't even check the cameras and the microphones before because our clientele never used them," Hutchinson said. "But now, with Zoom, we have people bringing machines back, saying it doesn't have a camera and so forth. So that's changed a lot."

Anyone can request a refurbished computer without a referral. Each computer is "wiped" of its memory and outfitted with either Microsoft Office or LibreOffice software, as well as antivirus protection.

Additionally, those who receive refurbished computers from STUG can bring them back for repairs at any time.

"We're on the honor system," Hutchinson said. "So, you send us a letter or an email saying, 'I need a computer for whatever reason,' and we're pretty lax on that."

And there's no age limit on what can be donated. If you're not sure of how to wipe your computer's memory, STUG will help you back up your files, too.

They also teach people how to use their computers, thanks to a group of instructors who donate their time.

"There's not a soul who's not a volunteer," said President Ann Ross. "Every one of us does it for the pleasure of giving back to the community."

STUG's origins date back to 1982 – long before the advent of the internet.
What started as the Suncoast Computer Users Group eventually became the Suncoast Technology Users Group. "We realized we were talking about a lot more technology than that," said Nancy DeMarte, the group's first vice president.

DeMarte said the classes are perhaps the biggest draw for new members. According to its website, with roughly 300 members, STUG is one of the largest technology user groups in the state – and among the top 10 in the country.

Now that STUG hasn't had to rent out physical meeting spaces due to the coronavirus, costs are down. So, the group announced a discounted annual memberships last month. Dues that once cost $65 a year now cost less than half as much – or $30 – with free memberships for K-12 and other full-time students.

Classes cover a variety of topics across different platforms: Windows 10 and macOS and Apple and Android smartphones and tablets.

Since much of the group's membership is age 50 and up, DeMarte said, the classes have also expanded to smart home technology such as Amazon Echo and Alexa devices and Ring doorbells.

When the group began pivoting to Zoom meetings and classes, DeMarte said she noticed a slight increase in attendance since members no longer needed to leave the comfort of their homes.

"There are so many people who still need what we give," said Ross.
Added DeMarte: "Technology, of course, has expanded into everything ... It's hard to do anything today without technology."

Sarasota Technology Users Group
The STUG refurbishing shop is located at 3949 Sawyer Road in Sarasota and is usually staffed with volunteers from 10 a.m. to noon on Mondays, Wednesdays and Fridays. It can be reached by phone at 941-539-7401, online at thestug.org or by email at refurb@thestug.org.