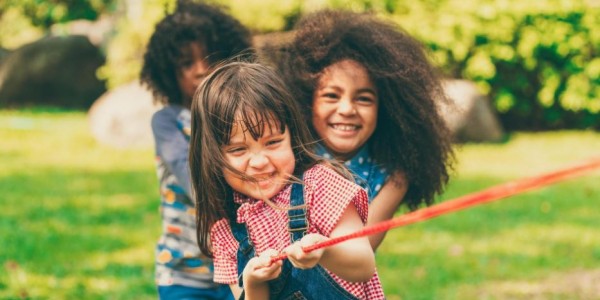 Safe and Stunted: How overprotective parents can get in the way of outdoor play

A recent study shows that just 10% of parents discuss race often with their children.

In the Netherlands, children are dropped into the woods in the dead of night until they find their way back to safety, and a lone 6-year-old riding the subway in Japan is pretty routine.

In the US, these might warrant a visit from Child Protective Services.

There’s an instinctive knowledge that being outside is good for kids, and there’s plenty of research to back it up, but climbing trees and grass-stained knees have trouble competing with screens despite numerous studies that reveal the ill effects of digital devices on everything from brain development to sleep.

“The opportunities they have for exploring are critical to developing executive function skills, task persistence, working memory, and problem-solving,” said pediatrician Michael Yogman, assistant clinical professor of pediatrics at Harvard Medical School, where he teaches and researches developmental interventions and behavior.

He’s also the lead author of a report published in the American Academy of Pediatrics detailing the importance of play.

The more obvious impact of outdoor play is on physical health and mitigating childhood obesity.

In fact, play is medicine. As the report urges, some doctors are prescribing it.

And as silly as that may seem, it’s needed.

A study by the Seattle Children’s Research Institute revealed that almost 50% of preschoolers lacked even one parent-supervised outdoor play session a day and that on average, children ages 10–16 spent a little less than 13 minutes a day on vigorous outdoor activity, while more than 10 hours were spent staying relatively sedentary.

Is our preoccupation with safety part of the decline?

To some extent, yes.

Yogman pointed out that some urban playgrounds might be unsafe, but in other situations, parents may be overprotective and not allow their children to climb on structures that are by and large safe but involve some risk of falling, for example.

“The advantage is that they can learn motor skills and coping skills from both success and failure,” he said. “Outdoor play gives them the freedom to explore the world around them and take risks.”

The effects of helicopter parenting can be long term.

A study from Florida State University found that college students with overprotective parents were more likely to experience burnout at school and had more difficulty transitioning from academia to the real world.

A helicopter parent is one who might save the science fair project when their child procrastinated or clear the way of obstacles instead of letting their child figure out how to navigate them.

“We underestimate children’s ability. Perhaps we’re depriving them of opportunities to develop coping skills they’ll need later in life. In the face of stress, you can come up with the resources to figure things out, and not be immobilized or act like a helpless victim,” he said.