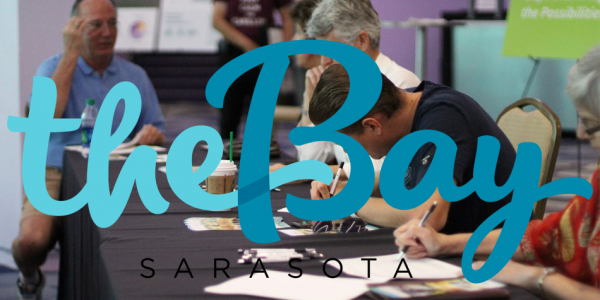 Reflecting on the Journey to Reimagine Sarasota’s Bayfront

Posted on September 07, 2018 by The Patterson Foundation
Editor’s Note: This blog was originally published in November 2017 and has been updated to reflect the unanimous passage of The Bay’s master plan to reimagine Sarasota’s bayfront. Photography Credit: Courtesy atLarge

Developing Sarasota’s bayfront into a thriving, vibrant, and accessible public destination is a community endeavor. Substantial time and consideration must be given to ensure the creation of a prime waterfront location that reflects the uniqueness of the Sarasota community.

The Patterson Foundation believes that communities have the power to create their future by using a process-driven approach based on mutual aspirations. It’s a belief the Sarasota Bayfront Planning Organization (SBPO) has embraced continuously since its formation in 2016 to facilitate the development of a master plan for the bayfront’s future. This emphasis on shared aspirations inspired The Patterson Foundation to strengthen this endeavor by committing $300,000 in catalytic funding, which has encouraged donors throughout the community to contribute $2.1 million. Throughout the journey to imagine the possibilities for Sarasota’s bayfront, there have been numerous milestones worth acknowledging and celebrating.

Late 2013: Envisioning the Future
Community and civic leaders took action and started a dialogue about creating a shared vision for the future. They worked collectively to form a roadmap for the next phase of the Bayfront. The goal was to create consensus among community and neighborhood leaders about what the future could be for this significant community asset. A vision statement was created to allow for broad community support and input.

November 2016: Sarasota Bayfront Bayfront Planning Organization Board Meets
A Framework Team of volunteers worked to create SBPO, which consists of nine members contributing their vast leadership and managerial experiences from multiple sectors. The Patterson Foundation strengthened this process, providing consulting expertise to help guide SBPO’s formation and board selection. In November 2016, SBPO held its first board meeting — thereby kickstarting a transparent, community-focused process toward a master plan for the space.

October 2017: Professional Firm Selected to Create Master Plan
Following a thorough application and review process, SBPO selected professional firm Sasaki to develop a master plan for the bayfront’s future. Sasaki brings a proven track-record of successful waterfront redevelopment projects to our region and will work over the next year on a roadmap to bring our community’s aspirations to fruition.

June 2018: Draft Master Plan Unveiled
Over a series of public open-house events throughout the community and multiple online surveys, Sasaki shared possible futures for the 53-acre plot along the bayfront through several iterations of design concepts. Along the way, Sasaki meticulously refined these concepts to reflect the community’s aspirations and feedback. The result, a draft of the master plan conceptualizing key features along with a blueprint for an organization and funding structure to make them possible, was presented for further public input and refinement.

September 2018: Sarasota City Commission Unanimously Approves Master Plan
Following a comprehensive presentation by SBPO and Sasaki that reflected months of refinement and upwards of 50,000 connections made through continuous community outreach, the Sarasota City Commission unanimously approved The Bay’s final master plan for the reimagined bayfront. Speaking on the process behind the plan’s creation, Deputy City Manager Marlon Brown said, “This is one of the best processes I’ve seen in 25 years of service. It’s ranking right up there in terms of listening and inclusiveness.”

Even with the progress made to date, the journey ahead will continue to demand considerable time, effort, and consideration — both from those directly engaged in the work as well as the citizens and stakeholders guiding it. As one of the stakeholders in this path toward a vibrant, accessible and sustainable bayfront, The Patterson Foundation will continue to be engaged to strengthen ongoing and future efforts for this once-in-a-generation opportunity.