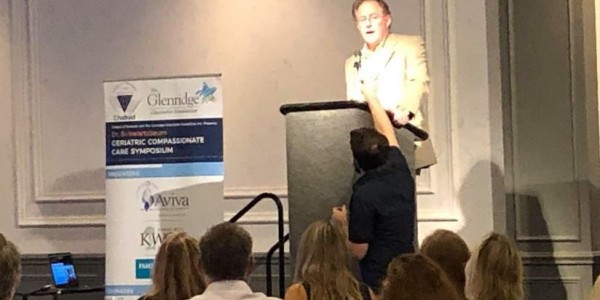 Most people would agree that when their time comes, they want to die well. But when a crisis strikes or a loved one is no longer able to communicate their wishes and advance planning documents are left unclear, that wish can be left up in the air. When that happens, spouses, adult children, siblings or other loved ones find themselves in the unavoidable role of surrogate decision-makers, trying to understand, sometimes with few facts and under emotional situations, what the people they love would have decided to do if they were able to choose.

It’s not an easy conversation — and one that only about a third of U.S. adults have, according to a 2017 study by Health Affairs.

The health care journal found that people over 65 were significantly more likely than young people to complete any type of advance directive. The difference between people who were healthy and those who were sick when they completed the directive was much smaller.

That’s partially why a handful of physicians, Jewish leaders, health care advocates, and 170 others packed into Michael’s On East last weekend for the inaugural Dr. Schwartzbaum Geriatric Compassionate Care Symposium.

It was a chance to close that gap and confront myriad other medical and ethical dilemmas common in geriatric care. One question asked of Barry Stein, a family practice doctor and medical director of Bay Village of Sarasota, was how to fold younger people into the conversation.

“We are not seeing children coming to the table with Dad, Mom or their grandparents to talk about death,” Stein said. “Even as we get older we’re still reluctant to have a conversation that will save everyone so much pain.”

Doctors and other caregivers play an important role in helping patients and families facilitate those conversations, Stein said. However, many physicians only speak to seriously ill patients about their goals, values — or prognosis — while there’s little time to spare.

Because the medical community has yet to take this up on a broader scale, these conversations are had on an individual basis, Stein said. But discussions around a prognosis, palliative care and end of life can be challenging for both the doctor and the patient.

Research by Macmillan Cancer Support has shown that 8 percent of people with cancer who said they had thoughts and feelings about their death had shared these with their health care provider.

Of those who had, only 19 percent of the conversations were initiated by the health care professional.

One reason might be that there are inherent barriers that doctors and others face when talking to patients about dying.

A 2018 report by the Royal College of Physicians found that, in addition to a physician’s comfort level, certain workforce pressures, society’s view that death could also be perceived as a failure and that modern medicine is expected to cure everything inhibited conversations.

“Therefore, it comes down to discussions within the family,” Stein said.

That’s where Rabbi Chaim Steinmetz, of the Chabad of Sarasota and Manatee, comes in.

Rabbi Steinmetz, who has led the religious organization for 29 years, said that family members speaking to each other are ingrained in Jewish tradition.

“The simple answer is that the Torah teaches us that our elders must share with children their intent afterlife and ask them to honor it,” said Rabbi Steinmetz. “I try to do my part by encouraging members, during every lecture or lesson about the topic of death.”

Because of his and other efforts, Rabbi Steinmetz said his congregation is now more open to the idea of speaking about dying, preparing wills and other affairs.

“Because doctors are not always comfortable being open with the patient and family members, that is where religious leaders can come in,” he said. “We need to use our influence and compassion to help bring families closer together. One way that can happen is starting a conversation few people want to talk about.”