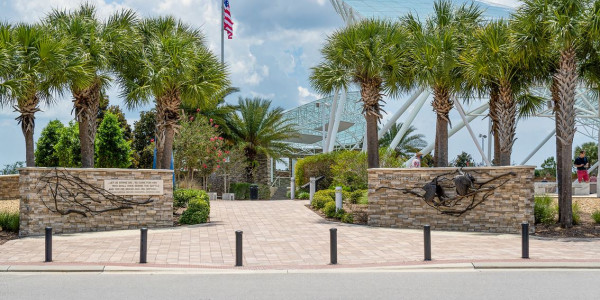 Editor's Note: This article was originally published by The Observer in early June. Spencer Fordin, A+E Editor for The Observer.

It’s a shaded place of solemn reflection, bordered by palm trees and headstones and covered by steel and glass. Here, sitting on a stone bench and shielded from the elements, you can block out the whole world for just a few moments of respite.

Patriot Plaza, the 2,800-seat amphitheater at Sarasota National Cemetery, was built to be an oasis in a sea of grief. It was intended to honor veterans and to celebrate their lives, and it was funded by philanthropy with art as a main ingredient.

“What makes this unique is this was the first time ever in the United States that the federal government allowed a charitable foundation to use their money to pay for an enhancement on a national cemetery,” says Gould. “There are enhancements on other cemeteries, but this was the first. And now it’s being replicated in Alabama and Georgia.” 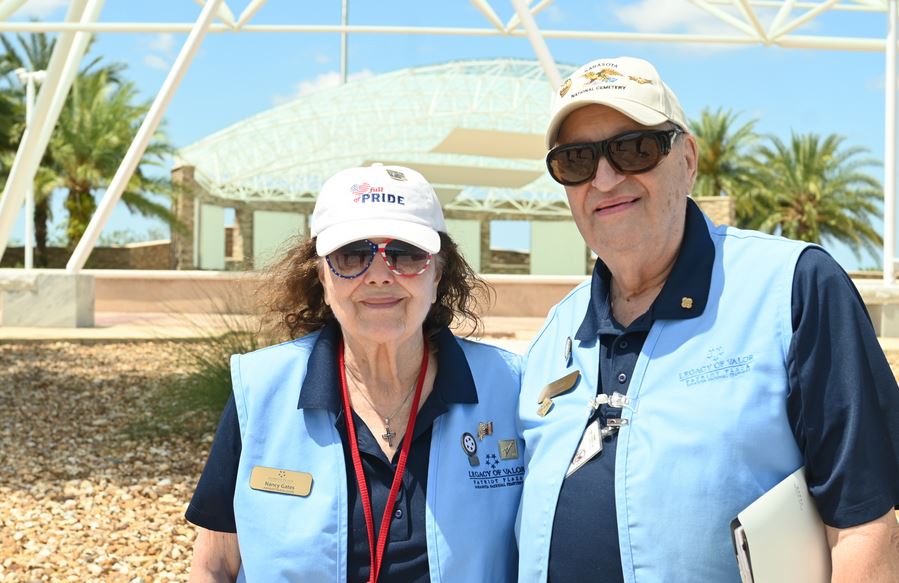 Today, the American flag is visible everywhere in the plaza, and it's usually at half-staff.

Twenty-five thousand veterans have been laid to rest since Sarasota National Cemetery's opening in 2009, and every weekday, an average of 15 funerals takes place here. The cemetery has 16 employees that assist with administration and maintenance of the 295-acre facility There are around 30 volunteers that help interact with the public.

Patriot Plaza also has a crew of tour guides who lead school groups around the facility and teach them about the art arrayed around it. One guide, Ed Gates, says he loves the moment when he's able to connect with youngsters about the importance of service. On a recent visit to Patriot Plaza, Gates recounted his encounter with a pair of middle school kids. He taught them some basic drill commands and the specific greetings for Marines and Army soldiers, and he wasn't certain whether they had really grasped it or not.

"At the end of the presentation, they're leaving to go to their bus, and they thank you for doing the tour and everything," says Gates. "These two girls as they walk away, they were saying, 'No, you do it!' I thought, 'What are they up to?' Then they turned around in unison and said, 'Mr. Gates,' and they gave me a big 'Ooooh-rah!'" 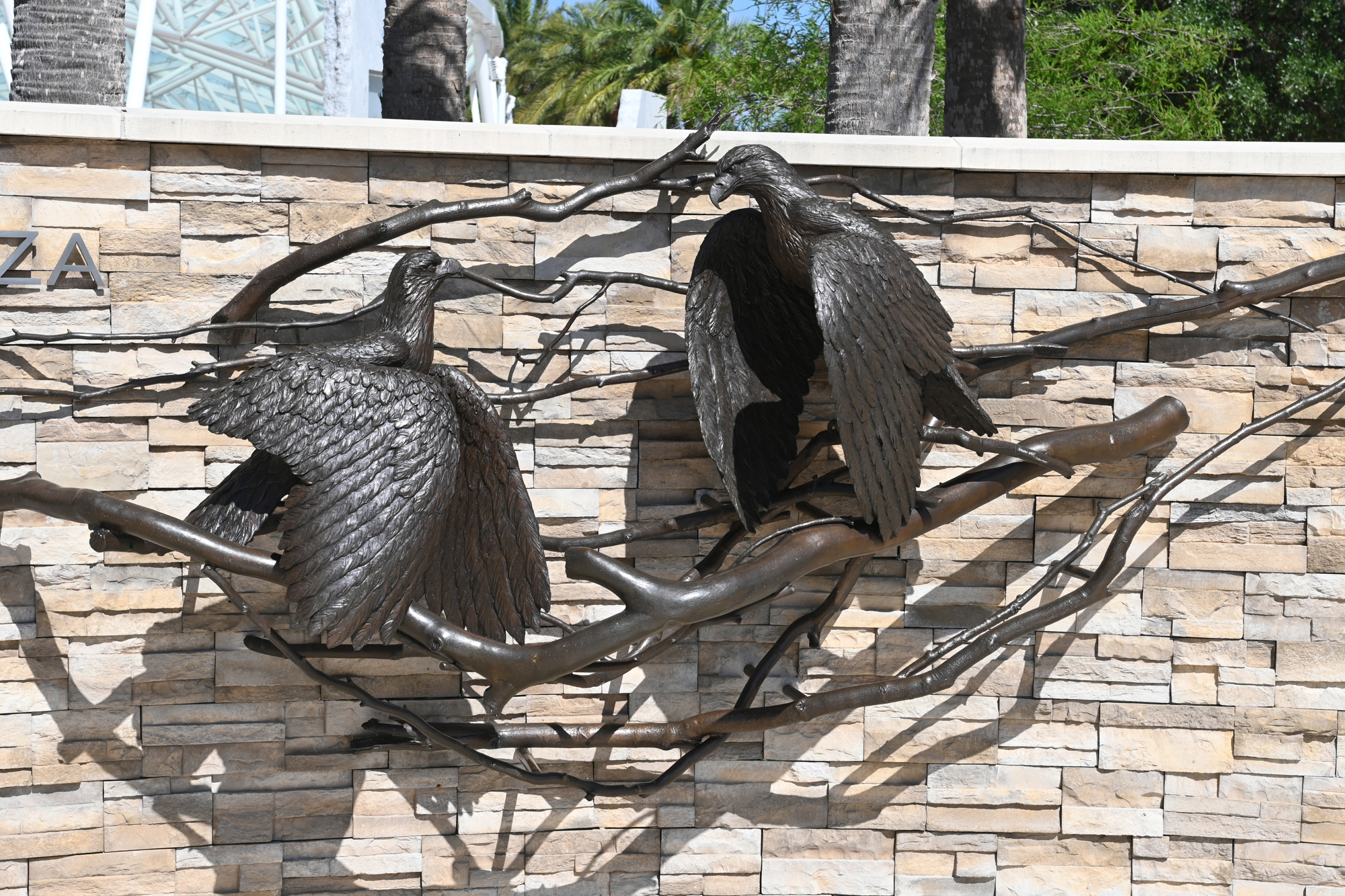 Patriot Plaza, built by Hoyt Architects, did not open to the public until 2014.

These two eagles are part of the Home sculpture at Patriot Plaza. (Photo: Spencer Fordin)

The east entrance to the plaza welcomes visitors with a pair of sculptures by Ann Hirsch, an instructor at the Rhode Island School of Design.
This installation — titled Home — takes up the space on two curved walls that funnel you into the plaza, and they're both made of cast bronze and meant to evoke a bird's nest.

Here, on the north wall, two bald eagles sit on curved branches. One, an older eagle, is sheltering and protecting the younger eagle, which may be about to leave the nest. 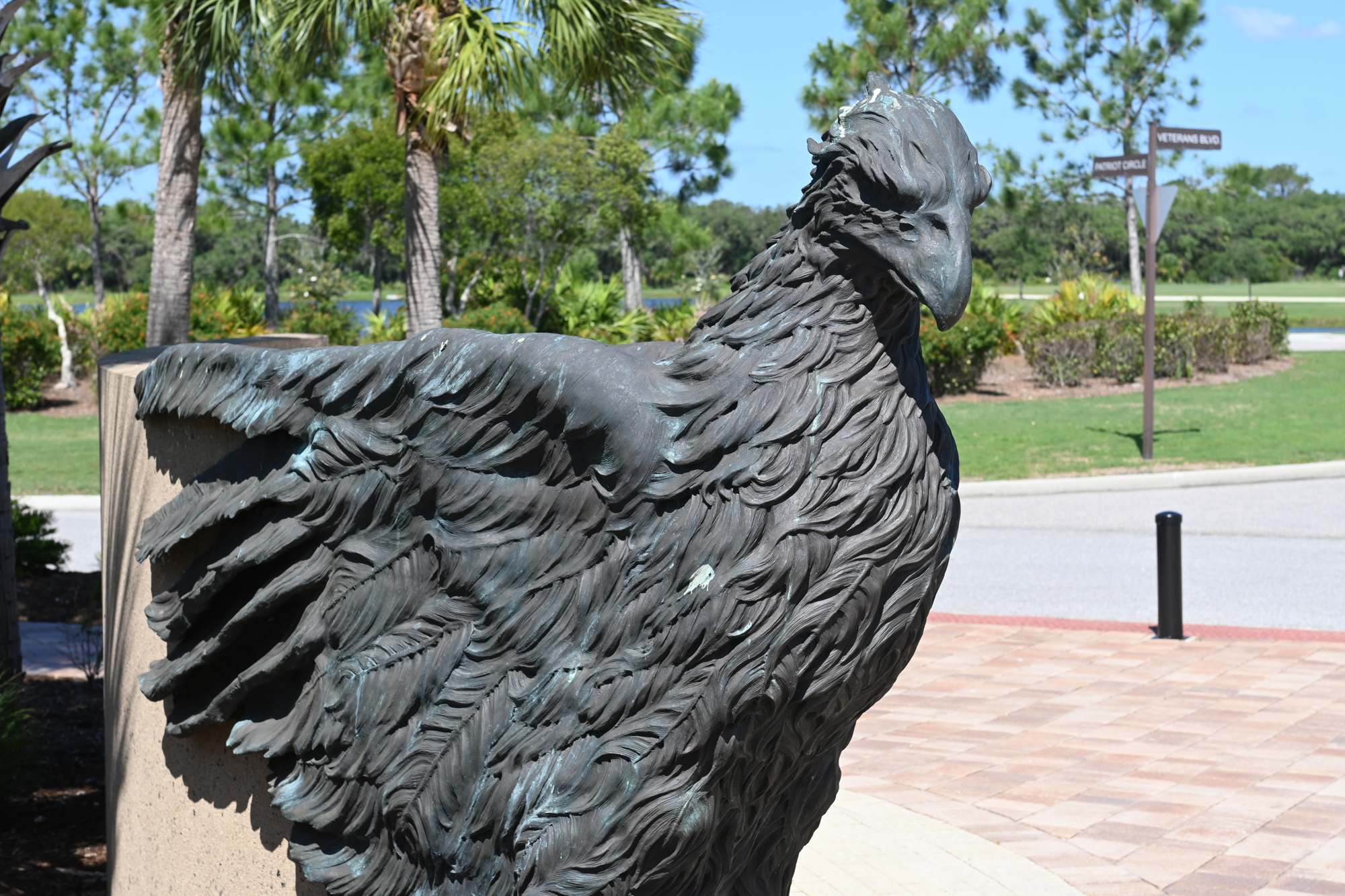 On the south wall, there's another nest of branches but with no birds in it. The south wall is emblazoned with a quote from Abraham Lincoln's second inaugural address. Both walls have branches from the artist's native New England worked into the sculpture, and Gates explains how she created it.

"This is an art process that's over 300 years old; it's known as the lost-wax process. The same process was used to create the imposing sculptures at the west entrance to the plaza."

Pablo Eduardo, a graduate of Tufts University, sculpted two gigantic eagles to watch over Patriot Plaza. The majestic birds of prey — seven feet tall and 12 feet wide — are called The Guardian Eagles. The sculptures are oriented sideways, which means that one watchful eye is pointed toward the plaza, and the other is gazing out toward the gravesites.

The seals for the five branches of the armed services — Army, Navy, Marines, Air Force, and Coast Guard — are emblazoned on the wall.
Gould says that display is never changing no matter what happens in the future.

"One of the questions we get from visitors quite a bit is that there's now a sixth Armed Force with space command; will another seal be added? The answer is no," she says.

"The artwork and pictures date back to the Civil War on the outer ring, and World War I, World II, Korea, and Vietnam. The art across the board is static as of 2012. Anything that happened after 2012, we're not updating or changing."

Night to Day, Here and Away

When you're seated in the amphitheater, your eyes are immediately drawn to the stone rostrum and the 80-foot flagpole. But if you peer down toward the bottom of the stage, running left to right, you'll see a beautifully colored mosaic.

That 50-foot-long piece — titled Night to Day, Here and Away — is meant to remind visitors that they share the same sky with their loved ones who may be serving halfway across the world. The artist, Ellen Driscoll, is a professor at Bard University, and she weaved in both the ever-changing horizon and symbolic emblems representing unit citations and medals.

You can find ribbons including the Medal of Honor, the Purple Heart, the Silver Star, and others in the mosaic, and it also delineates laurel leaves and stars; blue for service members and gold for those who die in service.

The mosaic is especially meaningful to Gates and his wife Nancy, who are Gold Star parents. Their son, the late Russell J. Gates, was a Navy aviator who flew combat missions in the Persian Gulf War and passed away in October of 2000.

Gates, after explaining some of the elements, eloquently describes the artist's intent.

"If you notice starting over in the left here, look at the sky. It's dark. As you move to the center, it turns a lighter color. It's daylight. When you move to the right end of the piece, it's dark again.

We're here; we're a military family. We might have a son, a daughter, a sister or brother, or an uncle or aunt serving their country overseas. We get up in the morning, we have freedom. Possibly these people are defending freedom. They may have had a bad day. They may have had to fight in combat. Night to Day. Here and Away."

Driscoll's art piece also serves to balance the entire plaza. Her mosaic — which began as a 15-foot watercolor painting —was also turned into a pair of 20-foot-tall spires. The spires repeat the theme, but they stretch the story upwards this time.

"Remember," says Gates, "That artist started with a 15-foot watercolor. Every one of these little glass pieces was manually inlaid. Needless to say, it took some time."

There's also another feature near the rostrum that draws a lot of attention. 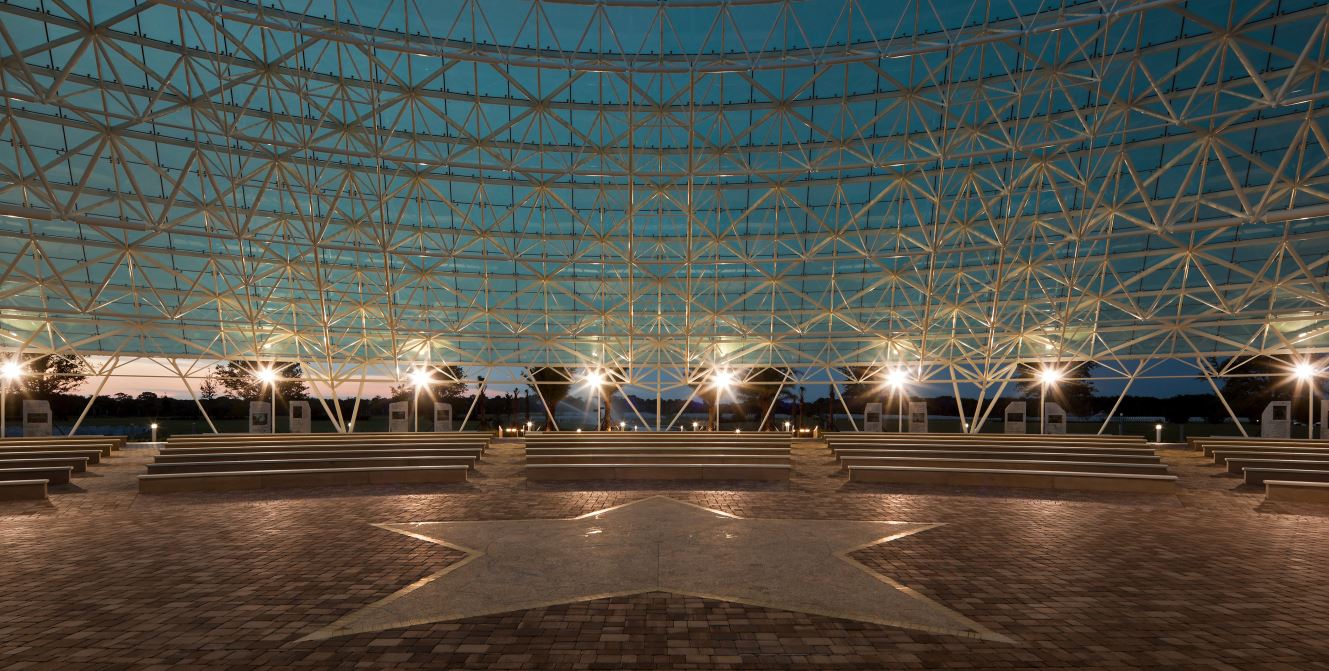 That's a five-pointed star called a Berghaus Star Projection that signifies the worldwide reach of the U.S. military. There's a star on the map to delineate Sarasota, and there's one more in Washington D.C., where the Commander in Chief resides.

The north pedestrian path to the plaza features an artistic monument highlighting the many ways that ordinary people have experienced service throughout American history. 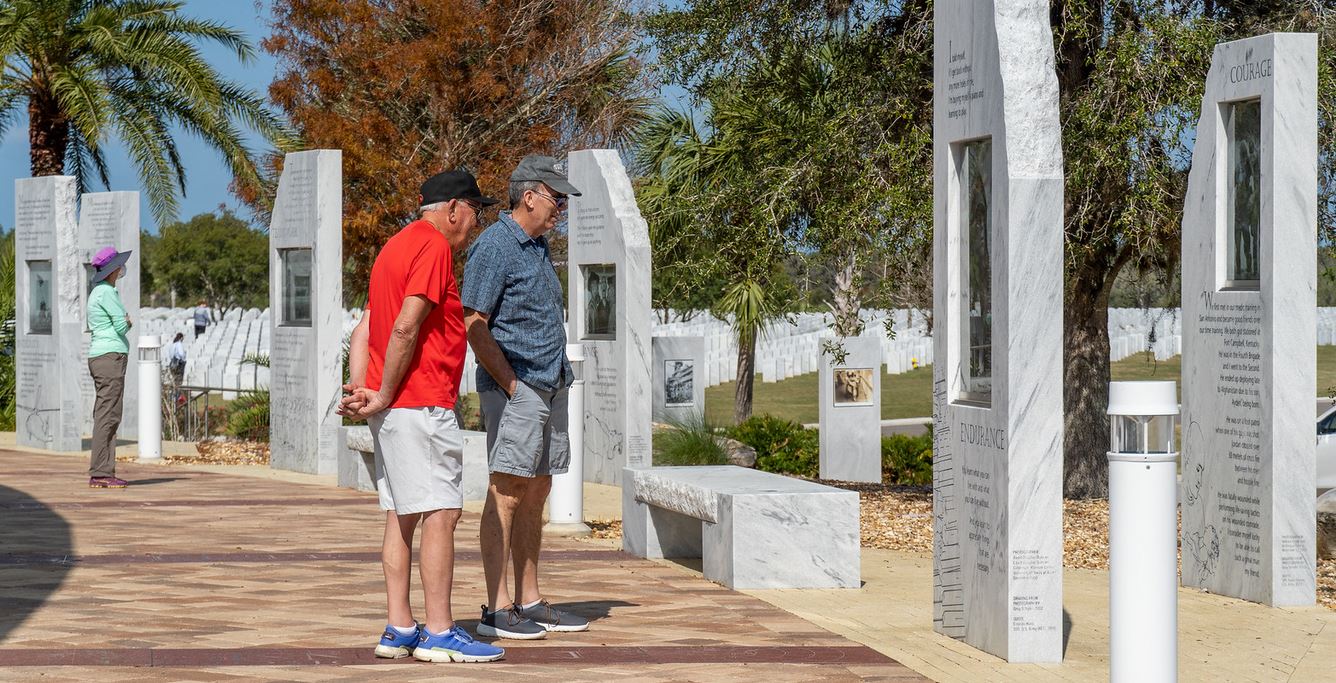 The exhibit consists of a series of marble plinths, each containing a photograph and a brief description of service on them.

The photos arrayed throughout the plinths address military themes such as conflict, technology, burial rituals, and celebrations. Interestingly, if you stand between two plinths, you can see a service experience from different eras. One plinth, for example, is of a soldier wearing an ancient prosthetic device, and the one facing it shows a modern-day version. That exhibit was designed by artist Larry Kirkland, as was the Testimonies exhibit that lines the pedestrian path.

Each of these eight-foot-six-inches tall marble slabs contains a service-related word and a personal testimonial from service members or family members of service members. The slabs are all unfinished; in some cases, they have a jagged edge, or perhaps they look like they've been through a battle. That's all design, says Gates.

"We live in an unfinished world. We still have work to do to be perfect. Every one of the tablets has one section that looks like it's been ripped. It's not perfect. We're imperfect. That's the empathy the artist is conveying."