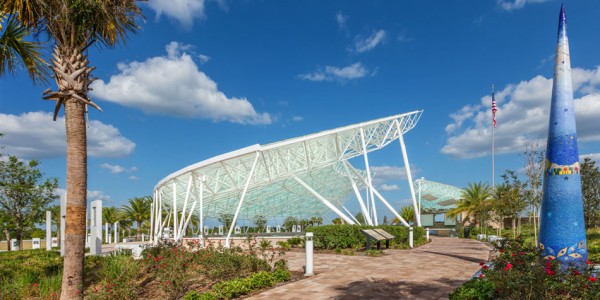 Posted on March 27, 2018 by The Patterson Foundation
Under Secretary for Memorial Affairs, Randy C. Reeves will honor the nation’s Vietnam War veterans Thursday at Patriot Plaza in Sarasota National Cemetery during “Welcome Home, Southwest Florida,” a free event presented by Tidewell Hospice. The under secretary’s visit to Sarasota will coincide with events taking place at national cemeteries across America during National Vietnam War Veterans Day on March 29.

Reeves leads the U.S. Department of Veterans Affairs — National Cemetery Administration in providing burial services to veterans and eligible family members through its network of 135 national cemeteries. Sarasota National Cemetery is home to Patriot Plaza, a 2,800-seat ceremonial amphitheater designed to honor the service and sacrifice of America’s veterans and military families. The Patterson Foundation funded the $12 million design and construction of Patriot Plaza as a gift to the nation through a partnership with the National Cemetery Administration — the first collaboration between private philanthropy and the U.S. Department of Veterans Affairs on an enhancement of this magnitude at a national cemetery.

“Our region is home to thousands of veterans and military families, whose service and sacrifice profoundly impact our world,” said Debra Jacobs, president and CEO of The Patterson Foundation." With Patriot Plaza, The Patterson Foundation created a place reflecting the experiences of those who served, are serving or may serve in the future as a way to honor their contributions and convey our nation’s gratitude. Patriot Plaza is designed to educate generations of visitors and instill a heartfelt appreciation for the acts of heroism to preserve freedom.”

Since its dedication in 2014, Patriot Plaza has hosted several events honoring veterans, inspiring patriotism, and embracing freedom. “Welcome Home, Southwest Florida,” the latest event to be held at the amphitheater, will feature a keynote address from retired Gen. and former chairman of the Joint Chiefs of Staff Hugh Shelton. The event is hosted by Tidewell Hospice and presenting partners the Community Foundation of Sarasota County, Manatee Community Foundation and the Observer Media Group, with in-kind support from the Vietnam Brotherhood — Alpha Company and the Military Officers Association of America, Sarasota Chapter.

Reeves previously served during Operation Desert Storm and the war on terror in his 27-year career in the military, both as an enlisted man in the Air Force and a commissioned officer in the Navy. His presentation during “Welcome Home, Southwest Florida” will mark his first visit to Patriot Plaza.

“It’s an honor to pay tribute to our Vietnam Veterans who gave so much during their time in the military and who continue to give back to their communities long after their service has ended,” said Reeves.

“Welcome Home, Southwest Florida” will take place Thursday from 9:30-11 a.m. at Sarasota National Cemetery (9810 State Road 72, Sarasota, FL 34241). The event is free and open to the public, but guests are encouraged to contact welcomehomesouthwestflorida@gmail.com to RSVP.