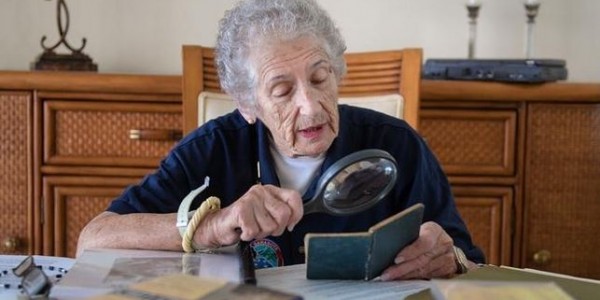 Editor's Note: This article is written by Billy Cox and was originally published by the Herald-Tribune.

Lorraine Glixon recently discovered her late husband’s World War II diary. Harry Glixon was a POW who was part of a historic prisoner exchange with Nazi Germany in 1944.

Struggling through Parkinson’s disease, dementia and a diagnosis of post-traumatic stress disorder, Harry Glixon spent the last decade of his life racing the undertaker, pecking away at the keyboards with the two-fingered intensity that characterized his typing skills.

His widow, Lorraine, describes him as “obsessed” as the old warrior demanded more and more of her time to edit the manuscript he would call “My Story.” Over the years, she would sometimes hear him coming to terms with what he’d done and seen, raising his voice in his study, “I can’t do this! I can’t do this!” And Lorraine discovered she couldn’t do it, either.

After Lorraine gave up, Harry relied on three outside editors/writers to advance his memoir to an abrupt ending in 1962. That’s how far he’d gotten when, in 2006, 11 years into “My Story,” Harry took a spill in his motorized wheelchair and never recovered. He died a year later, at age 86.

The unfinished work that Harry Glixon left behind was so raw — and in so many ways, unflattering — that he requested in the preface that “the contents of my book be kept from the children until at least their 25th birthday.”

He had hoped, according to that preface, that his accounting would “demonstrate that I was a good person and not selfish.” But he also feared his journey through the past would “regenerate old demons and impact and diminish my current happiness.” And that, according to Lorraine, is exactly what happened.

Of the unfinished memoir’s 304 pages, roughly 80 are devoted to World War II, during which Harry Glixon earned two Purple Hearts, a Bronze Star with V for Valor and a recommendation for the Distinguished Service Cross. He also made history in such unprecedented fashion, it played on newsreels that cheered audiences in both the U.S. and Germany.

In November 1944, after 45 days in enemy hands-off coastal France, the Jewish atheist from New York became one of an eventual 149 Allied prisoners of war swapped for an equal number of German POWs in the only such exchange in the European Theater.

Thinking he was done with the war — the Geneva Convention of 1929 stipulated that repatriated prisoners could not return to active military service — Glixon was instead dispatched again to the front lines, where he lived in mortal fear of being captured inside Nazi Germany. He nearly went mad.

On Saturday morning, Lorraine Glixon, 89, will no doubt be thinking of Harry’s trial by fire when she attends a ceremony called the POW/MIA Outdoor Remembrance Educational Event at Sarasota National Cemetery’s Patriot Plaza. National POW/MIA Recognition Day is typically observed on the third Friday of September.

Beginning at 9 a.m., Eagle Scouts led by Palm Beach teenager Joshua Katz will read the names of every veteran buried in the cemetery as part of Katz’s ongoing volunteer project called “No Soldier Should Ever Be Forgotten.”

For Lorraine Glixon, the past is close at hand, and not just symbolically. Last month, while doing some housecleaning, she discovered two handwritten diaries her husband had brought back from Europe, one of them from his days as a POW. She never knew they existed. Suddenly, the final tortured years of their marriage were in her face again, full flush.

“Harry was fine until he started writing his book,” she recalls. “After that ... my life was miserable.”

***
The spiral notebooks are tiny, about the size of a smartphone, and the inky script is equally compact. You can tell when he’s on a roll because his handwriting flows for pages in a uniform rightward slant. But every now and then, it stutters into vertical block lettering, as if the lights are off. The quality is furtive, maybe surreptitious. Lorraine needs a magnifying glass to decipher.

Though each entry has a date, it is difficult to tell if Harry Glixon’s notes are contemporaneous, or postdated summaries of recent days gone by. There is no mistaking the author’s identity on the title page. It reads, in large bold lettering, “Harry Glicksman 42041875 prisoner of war — Lorient — United States Army.” Subjected to antisemitism by some of his Army colleagues, he would change his last name in 1946.

The first diary entry is Oct. 2, 1944. He titles it “Bloody Sunday,” and it runs a full seven pages. Company K, 301st Regiment, 94th Infantry Division, Third Army, Private Glixon is a forward observer getting his first taste of combat on a cold, damp afternoon less than a month after arriving in Normandy.

The action is chronicled in even greater detail in his manuscript. A formal accounting assembled later by his commanding officer portrays Glixon as a hero.

Shaking off shrapnel wounds to his neck and shoulder, Glixon creeps to within 50 yards of SS positions and radios American artillery onto German defenders in a five-hour running battle. “Captured enemy documents verified the fact the artillery fire caused over 100 enemy dead, and many more wounded,” states Captain Richard Simmons.

Outnumbered, low on ammo, a lieutenant decides the unit should surrender. Glixon tosses his dog tags, which bear the initial H for Hebrew. His buddy, Cpl. John Atkinson, ties a white bandage to his rifle’s bayonet, holds it high, approaches German lines, and is shot dead immediately. The rest of the defenders hold their fire, and the remains of Company K are marched into Lorient, where the only thing that hasn’t been destroyed by Allied bombs is their primary target, a U-boat base.

The prisoners are eventually ferried five miles off the coast, to Isle de Groix, where they join other POWs. Glixon says his words fall short of describing defeat. “The sound of the guard’s boots provided the tempo of a Wagnerian dirge, but there were no heroics in the lamentations of cold winds,” he writes. “How can I now translate these feelings into today’s writing.”

Given his knowledge of German and French, Glixon proves indispensable. He establishes such a rapport with a number of guards, Glixon’s fellow POWs grow suspicious. The tension is palpable. An officer rifles through Glixon’s wallet, his address book, notes a number of Jewish-sounding surnames. He smirks and makes a veiled threat. But with the German stronghold so isolated from Hitler’s backpedaling main armies, the Oberleutnant knows the war is lost.

The food is mostly horrible — Glixon will lose 20 pounds — but their treatment could’ve been worse. A German sergeant and survivor of combat with the Soviets sounds a warning: “When you conquer Germany, then you will fight the Russians alone to determine the great imperialist. You will be sorry you do not have Germany’s help.”

In November 1944, thanks to historic negotiations conducted by 22-year-old American Red Cross social worker Andrew Hodges, Glixon is among scores of POWs exchanged in St. Nazaire. But in what he describes as “a breach of faith” and a violation of international law, he gets thrown back into combat within weeks.

His manuscript sweeps through the rest of the campaign into Germany, from horrific skirmishes at the Battle of the Bulge, to his promotion to sergeant, to getting busted to private for an accidental gun discharge in Prague during the occupation. Glixon also finds room to detail his sexual liaisons with French and German women along the road to victory.

His recollections of war are equally unsparing, clotted with graphic scenes of death, deprivation, frostbite, amputation, another serious shrapnel wound, capturing dozens of over-the-hill German home guards, the trauma-induced evacuation of his bowels. He grapples with the images of a buddy named John Pierce, who loses his right foot to a “shoe mine.” In his manuscript, an older man writes, “for years after, even now, when certain sensations occur, I lose sensations in my right foot.”

In fact, the horror became so intense, Glixon writes, that in an attempt to escape it, he and a buddy named Yawn removed their shirts in the middle of winter, hoping in vain to catch pneumonia.

In February, he and Yawn encountered foxholes strewn with German corpses. One was frozen in a sitting position, knees bent. Glixon searched his foe’s clothing for souvenirs and trophies. A wallet identified his opposite as Hans, and it contained a photo of Hans with his wife and children.

“I thought of Hans’ widow and could almost visualize her asking me to stop what I was doing,” he writes. “I recoiled and (was) sickened at what we were doing. What had become of me? Had I changed so much or was this attitude always part of me?”

***
In 1944, while her future spouse was trying to survive one of humanity’s darkest chapters, Lorraine Finke turned 15 and supported the war effort in prescribed fashion. She volunteered for the Civil Air Patrol’s Cadet Program, where she prepared to defend America by learning skills like Morse code and aircraft identification.

Fink, whose family lost relatives in the Holocaust, would marry and outlive three husbands, all WWII veterans. Not coincidentally, for one day a week, Lorraine Glixon greets visitors to Sarasota National Cemetery. She also volunteers as a docent at Patriot Plaza.

The discovery of Harry’s diaries has brought it all back, the short hot temper, the verbal abuse, the unending demands over a doomed memoir that took an enduring toll on Lorraine as well.

But there was a time during their 14-year marriage, before the book, before his determination to confront the past, shortly after his retirement from a 41-year career in electrical engineering, when things were different. These are the times Harry Glixon’s widow would prefer to remember. “He was,” she says, “a good man.”