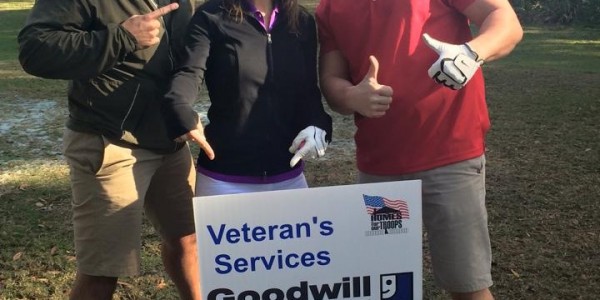 Posted on February 26, 2015 by Linda Gould, consultant with The Patterson Foundation

Six months ago I was asked by the Rosedale Country Club Manager Charles Nehls to be the keynote speaker for their 7th annual military ball in January 2015. At the time, I had no idea of the connections that would be woven through and beyond that meeting.

Three years ago, residents of the Rosedale community, specifically two military spouses, Deb Kehoe, whose husband James is an Army veteran of the Vietnam War (1966-1969), and Kathi Skelton, whose husband John served in the Coast Guard (1959-1963), decided to raise funds in conjunction with the military ball benefiting an organization that supports veterans and their families. They raised $4,500 for Homes For Our Troops, which builds specially adapted homes for disabled veterans and then turns them over to the veteran mortgage free.

They are not only building homes, they are also rebuilding lives. In 2014, the fundraising campaign evolved into a golf tournament and raised $11,500. After meeting with these two dynamic women, connections began to evolve and grow throughout our region as they spread the word about their efforts.

Homes For Our Troops participated in the Veterans Legacy Summit in November 2014, which was hosted by The Patterson Foundation. Within the summit's "Legacy Zone" national organizations serving veterans were highlighted on national, regional and local levels. After connecting with a myriad of local organizations for participants and supporters, this year’s golf tournament raised $18,275 for Homes For Our Troops! The veteran whose home will be built lost two legs and a hand in Afghanistan. What a wonderful way to honor and support this veteran and his family.

Connecting and collaboration -- these are vital to creating new realities and helping those who have served and sacrificed for our freedoms. There are so many organizations in our community that serve those who have served, are serving or may serve in our nation's armed forces. The Rosedale community's event brought out many supporters, including Gold Coast Eagle Distributing and Goodwill Manasota, whose Director of Veterans Services C.J. Bannister not only sponsored the event but also participated in the golf tournament. The Sarasota County Veterans Commission (SCVC) sponsored a hole in the tournament.

The beauty of this event is that it demonstrates how everyone can make a difference in the lives of those around them. You just need to know how to use time, talent or treasure. Talk to your neighbors, get involved, and volunteer with an organization that directly helps others around you. You are the difference.