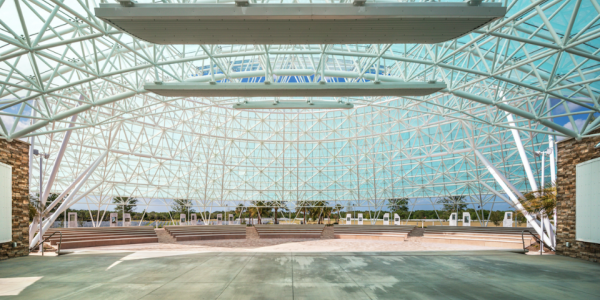 Posted on July 25, 2016 by The Patterson Foundation

Patriot Plaza was voted third in The Florida Association of the American Institute of Architects (AIA Florida) People’s Choice Competition for 2016. The winners were announced at the 2016 AIA Florida/Caribbean Honor and Design Awards.

Patriot Plaza received more than 30,000 online votes during the People’s Choice Competition, which gave individuals worldwide the opportunity to vote for their favorite building from a list of 39 Florida projects nominated by local AIA chapters. More than 283,000 total votes from people in 48 states and 57 countries were cast in this year’s competition.

“When The Patterson Foundation conceptualized Patriot Plaza, the goal was to honor veterans, inspire patriotism and embrace freedom in our region and beyond,” said Debra Jacobs, president and CEO of The Patterson Foundation, which funded Patriot Plaza’s $12-million design and construction. “The volume and dedication of online voters from around the world is a testament to Patriot Plaza’s ability to convey the experiences of our service members and their families in a way that transcends traditional barriers. It’s humbling to know that it has already become a part of the architectural legacy for which Sarasota is renowned, and we’d like to congratulate the other beautiful structures recognized in the competition.”

Patriot Plaza was developed through a public-private collaboration between The Patterson Foundation and the National Cemetery Administration – the first time private philanthropy worked with the U.S. Department of Veterans Affairs on an enhancement of this magnitude at one of its 134 national cemeteries.

Located at Sarasota National Cemetery, Patriot Plaza hosts veterans-related events and provides seating for up to 2,800 people. Stories of the service and sacrifice of service members and their loved ones from the Civil War to the present are preserved and illustrated through $2 million in commissioned artwork.

“We are honored to be the designers of a project that has clearly touched so many people,” said Gary Hoyt of Hoyt Architects, the design architect for Patriot Plaza.

In addition to the AIA Florida People’s Choice Competition, Patriot Plaza’s design was honored in June at the AIA Gulf Coast Design Awards Gala. Patriot Plaza won both the Juried and People’s Choice Spirit of Sarasota architecture awards in the local-level competition as chosen by both a panel and online voters from cities across the nation and Canada.