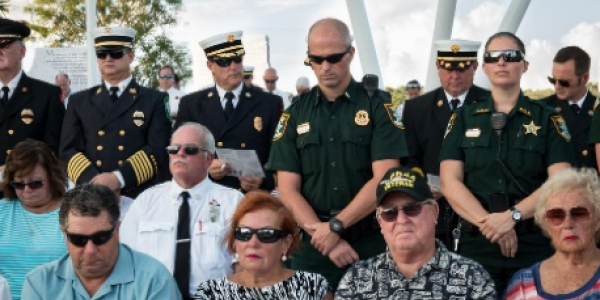 Posted on September 24, 2016 by Linda Gould, consultant with The Patterson Foundation

Where were you? It's the name of the Alan Jackson song that asks: Where were you when the world stopped turning that September day. It was written about September 11, 2001 -- the day of terrorist attacks on U.S. soil now 15 years ago.

Recently, someone asked why we need to commemorate this day. Why keep bringing it up? We commemorate 9/11 so we never forget and so we always remember -- not just those who died that day going about their normal routines but to honor and recognize those whose routines included serving and sacrificing their lives trying to save others.

First responders and the military deserve our gratitude and respect, and we try to provide that as often as we can. Instead of making our nation fall apart that day, September 11 brought us closer together. That alone is a good reason to remember that day and honor those who perished.

Many people have a story of where they were that day. I was in Guatemala working as part of the U.S. Military Group in the U.S. Embassy and was getting ready for work as I watched the first scenes unfold on television and then raced to the Embassy. As a retired Army officer, I have many friends that were in and around the Pentagon that morning. My best friend, an Army Sergeant Major, was walking to work, climbing a hill overlooking the Pentagon just as the shadow of American Airlines Flight 77 flew over her. Another friend’s story includes receiving a phone call at work from someone in the Pentagon -- both sides calm--basically saying, “We know there is a plane en route to our location."

Caller: “There’s an inbound to DC.”

LTC Flett: “My husband in the Pentagon.”

Both Dianna and Steve survived that day but it was a surreal experience and still a strong memory for both of them.

We come together across our nation on significant dates and September 11, Patriot Day, is one to remember. In Southwest Florida, more than 1,800 people -- young and old -- from our community came together at Patriot Plaza at Sarasota National Cemetery.

It was a solemn but dignified presence that was also filled with camaraderie, uplifting music and patriotism. The diverse crowd sang along with the chorus and listened to the speakers that included a Fireman First Class that was on site within minutes of the twin towers being hit in New York.

We come together, to Remember, Reflect and to Recognize the heroic acts from that fateful day 15 years ago. The bell tolled for the fallen as the crowd spoke their names aloud to ensure no one would be forgotten. The artwork at Patriot Plaza depicts many eras and testimonies, including Patriot Day featured in the Democracy Tablet’s photo of Alicia Watkins. Sergeant Watkins is saluting as a tear rolls down her cheek at a ceremony on the 5th anniversary of 9/11. She is remembering her friend Sergeant Tamara Thurman who was killed that day at the Pentagon.

We remember, we are connected, we come together to honor and reflect.