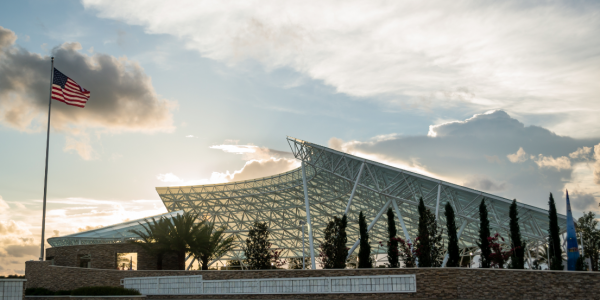 Posted on July 05, 2016 by The Patterson Foundation

Patriot Plaza, the ceremonial amphitheater at Sarasota National Cemetery, is nominated for The Florida Association of the American Institute of Architects (AIA Florida) 2016 People’s Choice Award -- with online voting open to the public through July 22. The nomination comes after Patriot Plaza won both the Juried and People's Choice awards in a local-level architecture competition last month in Sarasota.

Presented by AIA Florida, the People’s Choice competition gives individuals the opportunity to promote public awareness of Florida’s built environment and great design by voting online for their favorite project. Patriot Plaza is one of 39 projects throughout the state nominated by local AIA chapters for this year’s award. More than 1 million total votes have been submitted in the previous two years of the competition.

“The Patterson Foundation created Patriot Plaza to honor service members and military families past, present and future, while educating visitors, now and future generations, about the many dimensions of sacrifice and patriotism,” said Debra Jacobs, president and CEO of The Patterson Foundation, which funded Patriot Plaza’s $12-million design and construction. “The many ways people in our region and beyond have embraced Patriot Plaza is inspiring. This nomination is an opportunity to promote Sarasota’s rich architectural legacy while sharing what is possible when private philanthropy and government work together with the 134 national cemeteries.

“It is deeply gratifying for the firm to see that this sacred venue has been embraced by locals and visitors alike,” said Gary Hoyt, the design architect for Patriot Plaza. “Frankly, it’s hard to believe that a cemetery is now listed as one of the top 4 of 126 things to do in Sarasota by Trip Advisor. It underscores our sincere appreciation for those who has given so much for this country.”

The judges were moved by Patriot Plaza's evocation of solemnity, high drama, and the extensive use of artwork in various media throughout the space.

“We love the approach, the way it captures dramatic vistas—the open Florida sky above that American flag,” said one judge. “It is a great example for other communities to follow.”

The Patterson Foundation developed this gift to the nation while working with the National Cemetery Administration – the first time private philanthropy has collaborated with the U.S. Department of Veterans Affairs on an enhancement of this magnitude at a national cemetery. Patriot Plaza has served to educate the community by hosting veterans-related ceremonies and events since its public dedication in 2014.

Visit ow.ly/ZS1e301B9ir through July 22 to vote for Patriot Plaza in the AIA Florida People’s Choice Competition. There is no limit to the number of votes an individual can cast.