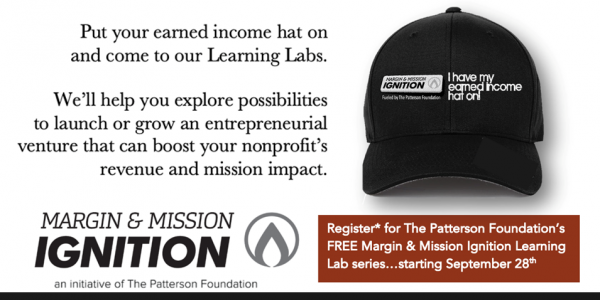 Posted on September 25, 2022 by Larry Clark, Managing Partner and Principal, No Margin, No Mission™ & Mike Oxman, Managing Partner and Principal, No Margin, No Mission™
"Each time The Patterson Foundation offered Margin & Mission Ignition (MMI), we've taken learnings from the previous iteration to tweak, refine, evolve, and strengthen it for the next round. So, it shouldn't come as a surprise that last month's official launch of MMI 2022 had several NEW ELEMENTS designed to add value for everyone involved." -- Debra Jacobs, president and CEO of The Patterson Foundation

New Element #1: MMI Pre Learning Lab "Guest Speaker Series." This year, to encourage people to register for the MMI Learning Labs, we added a new component in advance of the Labs, which we titled the Earned Income Guest Speaker Series. During these virtual sessions, CEOs from four organizations shared what made their earned-income ventures thrive, emphasizing the key phases of work that were integral to their journey. You can view the recorded sessions by clicking the links below:

New Element #2: Incorporating Success Stories from Hartford, CT. Always looking for ways to tap into TPF tenets of "connective tissue" and "shared cookies" between people, organizations, and communities, a new opportunity presented itself while the Guest Speakers Series was being developed.

By way of brief background, several years ago, the Hartford Foundation for Public Giving (HFPG) decided to replicate TPF's MMI initiative, bringing it to nonprofits in Greater Hartford, CT. Fast forward to today, several organizations that graduated from that initiative have impressive success stories to share about their earned income ventures.

With No Margin, No Mission's Mike Oxman and Larry Clark leading both TPF's and HFPG's earned-income initiatives, it made sense to weave the work of the two foundations together by calling on a select group of Hartford's nonprofit CEOs as guest speakers to share their "cookies" with nonprofit leaders on Florida's Suncoast.

So, in addition to having MMI CEO superstars Mike Mansfield and Janene Amick headline the Guest Speaker Series, Hartford's Carol Fitzgerald (CEO at New Horizons, Inc.) and Sharon Castelli (CEO at Chrysalis Center) were invited to participate in the sessions.

New Element #3: MMI Targeted to Larger Nonprofits. Unlike in the past, in which we invited EVERY organization in The Giving Partner to participate in our MMI Learning Labs, we decided to be more targeted in our approach this year. As a result, our outreach was limited to organizations with operating budgets of $750,000 – $10 million.

Why? We know from experience that nonprofits with more financial resources tend to be stronger AND better aligned in their LWRCC, resulting in a greater likelihood of success for an earned-income venture.

And the good news is our targeted approach is working, evidenced by a strong group of nonprofits participating in the Guest Speaker Series and registering for Learning Lab #1.

New Element #4: MMI Expanded Marketing Approach. As MMI has evolved over the years, our approach to marketing has, too. With this year's addition of the Guest Speaker Sessions to the Learning Lab Series, we developed a multi-tiered marketing approach to build visibility, awareness, and drive registration:


Special thanks to Michael Corley for TPF leadership; Mike Oxman and Larry Clark for content development, creative inspiration, and session facilitation; TPF Fellows Michael Zimmerman and Rachel Hettinger for thoughtful planning and execution alongside Larry and Mike; Josephine Eisenberg for logistics and coordination; plus Stacey Gadeken and Nancy Henry for assisting with the production of materials.