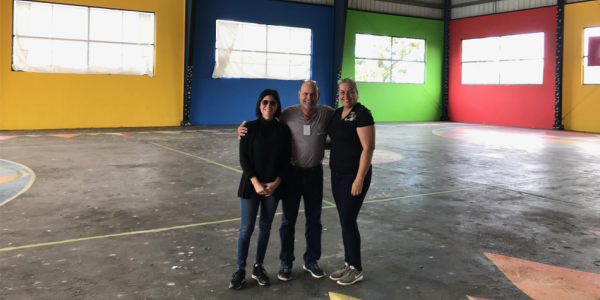 Posted on January 25, 2019 by Debra Jacobs, president and CEO of The Patterson Foundation

Thanks to coordination by The Patterson Foundation’s (TPF) Michael Corley and NetHope’s Brent Carbno, my time was well-invested learning about 2017 Hurricane Maria’s impact on Puerto Rico and how NH makes a difference. Note that TPF’s interest is not only because of our long-time relationship with NetHope (NH) but most particularly because of TPF’s investment in NH’s Caribbean Preparedness Initiative.

My morning began with Cristina (Crissy) Gordillo, who works for NH on-site in Puerto Rico, picking me up at the hotel, where I was in town to present a session on “Sustaining Collaborative Networks” to 100 Million Healthier Lives’ Community Health Improvement Leadership Academy (CHILA). We began our journey to meet up with Alberto Bruno (Bruno), Claro’s Voice and Data Analyst who also worked with NH on all installations and de-commissioning. Claro is the leading telecommunications company in Puerto Rico. Our destination was a youth center/basketball court in the mountain town of Ciales…one of the first of 35 sites where internet connectivity was installed, and now one of the last to be de-commissioned. 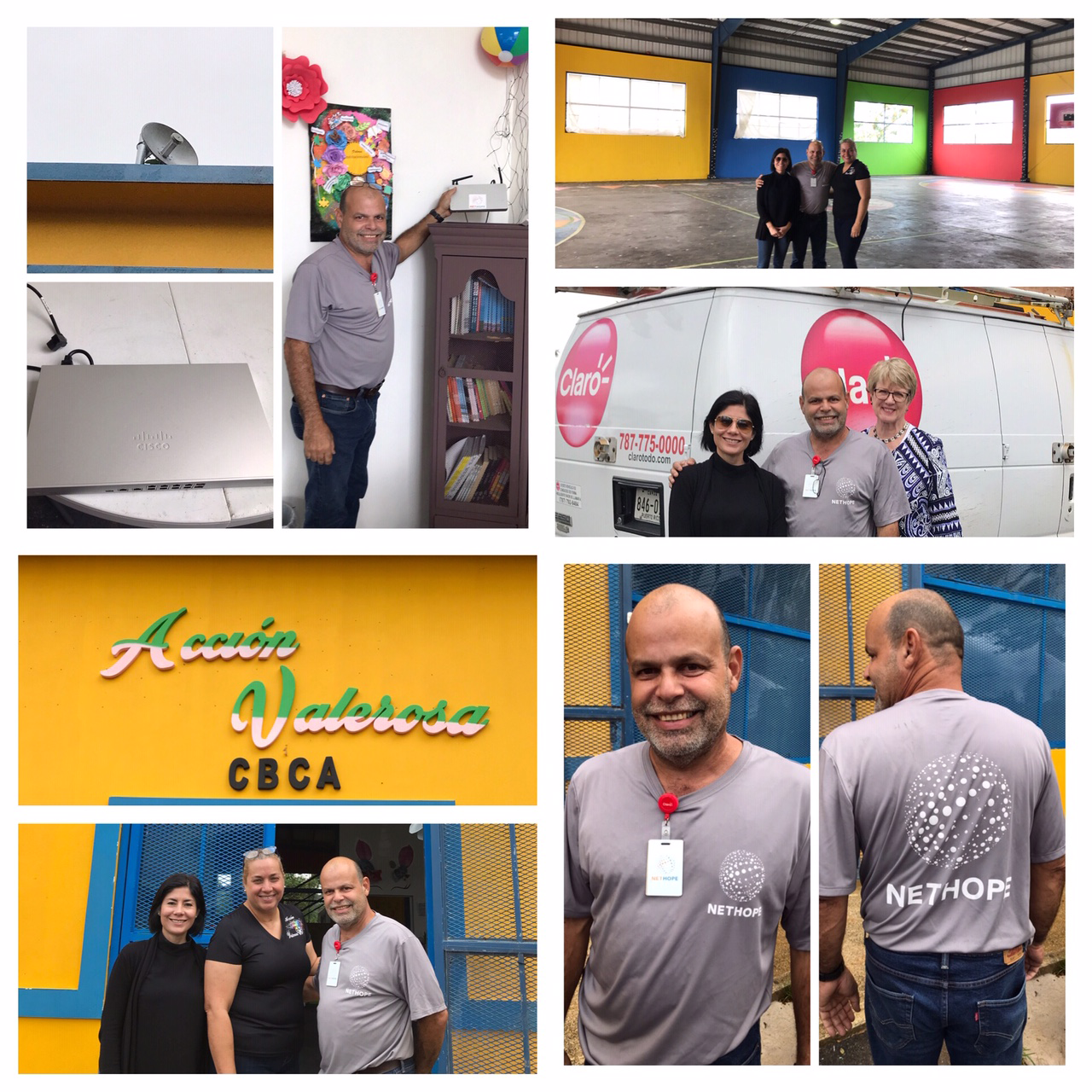 Along the way, Crissy shared her story of how Hurricane Maria changed her life. She was a data tech with administrative responsibilities in a radiology company when Maria struck. Living on the coast, where Maria was targeted to land, Crissy and her partner checked into a hotel with the hope of staying out of harm’s way. As a helper by nature, she got acquainted with the staff, pitching in to help preparations, during and after Maria. When it became clear that Crissy could not return to her home, the hotel kindly let her stay on at the rate she originally paid. With demand for hotel rooms for first responders, FEMA, and other relief personnel, rooms were in scarce supply. When Crissy’s path crossed with NetHope at the hotel, she was engaged to support logistics because of her local knowledge, bi-lingual skills, and understanding of logistics coordination. On a side note, Crissy considers herself lucky that her power was restored in 45 days.

After a 45-minute twisty-turning ride up the mountains, we arrived at the youth center where one immediately felt the vibrancy of a place where scarcity is not a roadblock, but a reality to be managed. Jenith Rivera, Accion Valerosa coordinator, beamed while telling the story (translated by Crissy) of how NH member Save-the-Children supplied many colors of paint for the families to brighten up the indoor basketball court. Bruno beamed with pride as he pointed out the equipment provided by NH, even cosseting the Cisco motherboard in a blanket.

While Bruno works at Claro, he purposefully wore his NH shirt and lavalier for my visit. The stories shared spotlighted how Accion Valerosa became the gathering place for this community, not only as they painted the basketball court, but also because of the invaluable internet access. While the solar panels and generator will remain, equipment for internet will be de-commissioned and deployed elsewhere. We did talk about exploring an agreement with the local school or engaging the mayor, but shrugs suggested the futility.

During the ride, Crissy shared that she continues to be a contractor with NH on logistics to support 50 sites for the refugees from Venezuela now settling in Columbia and assisting with connectivity in Guatemala post the volcano. Over lunch, both Crissy and Bruno shared stories that radiated their admiration and gratitude — often giving shout-outs to Dag, Ramy, Gisli, and Frank. She said the preparedness drill in Panama would be with her forever.

A treasured email message from Bruno:
Just some quick comments before you leave to the states tomorrow. On behalf of Claro and all the new friends I made, much of them from NetHope which were done with the mission therefore you could not meet them, and the entire population of people we helped here in Puerto Rico, I would personally like to thank The Patterson Foundation for getting involved in helping our restoration. Many is still needed to be done as you have seen with your very own eyes, but trust me it will be done. We never give up. Again it was a complete pleasure knowing you, speaking to you, and having lunch. I want you to know that every time I wake up in the morning and look at the mirror, I can truly say to myself that thanks to The Patterson Foundation, NetHope, Cisco, Claro, and many other partners, the missions were done, and done in a very professional and quick manner. Time is one thing that never rewinds, so we work in a fast pace to help others. Debra, if I may be of any help in the future, you can always count on me for anything. Take Care, Alberto Bruno Claro/ Voice, and Data Analyst

A treasured memory thanks to Crissy:
As we traveled down the mountain roads, at one turn, she interrupted our conversation and said, “Debra, please look at the views. This is my country that I love.” Indeed, not only is Puerto Rico a land of many majestic vistas, but it is also rich with caring and talented people.