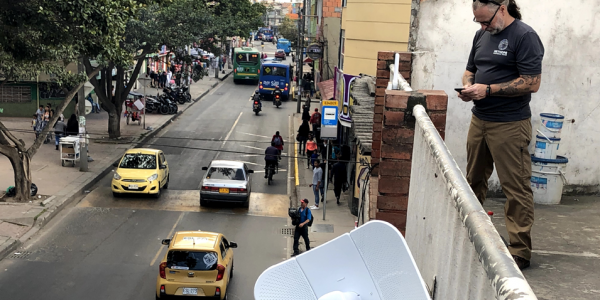 Posted on October 08, 2019 by NetHope
For the past three years, Venezuela has hovered on the edge of complete breakdown. The situation has drained the country of about 13 percent of its 31 million people, many migrating to Colombia and surrounding countries as the economy collapses and the political climate becomes increasingly toxic.

Since December 2018, NetHope has deployed a half-dozen teams to set up vital connectivity hubs for those displaced by the turmoil in Venezuela. To date, 85 sites have been installed in places such as clinics, hospitals, and registration centers that benefit both our responding nonprofit member organizations, but also the displaced individuals as they make their journey along a massive migration route.

To accomplish this, NetHope has been fortunate to receive financial support from several of our tech partners and institutional funders to cover the costs of this large-scale project that is impacting an entire multi-country region.

The Patterson Foundation, one of NetHope's long-term funding partners, just announced it is providing $75,000 to support our work to provide connectivity to Venezuelans who have been displaced. The contribution will power an additional 100 Wi-Fi hotspots along the primary travel routes for people flooding out of the country.

Connectivity is a lifeline for the millions of people seeking refuge, allowing them to stay connected to family and friends while providing access to information regarding organized relief efforts, healthcare, and safety. Additionally, the hotspots are essential to organizations working in the region that need reliable communications to provide relief.

"Those fleeing violence and threatening circumstances need to communicate via Wi-Fi as much as they need food and shelter," said Debra Jacobs, president and CEO of The Patterson Foundation. "For many years, NetHope has applied on-the-ground efforts, along with its expertise and collaborative approach, to turn connectivity voids into solutions for people in turmoil."

By partnering with technology companies and funders such as Amazon Web Services, Facebook, and Google, NetHope and its alliance of 56 leading global nonprofit members, design and implement innovative approaches to solve development, humanitarian, and conservation challenges worldwide. Through its work responding to the Syrian Refugee Crisis, NetHope gained insight on the value of staying connected with friends and family for people along their journey.

Since 2010, The Patterson Foundation has provided nearly $1.99 million to strengthen NetHope's global response efforts for disasters such as the Syrian Refugee Crisis, the Ebola crisis, the Nepalese earthquake, and NetHope's Caribbean Preparedness Initiative.

"The Venezuela migration crisis represents one of the single largest movements of a population group displaced from their country in history," said Brent Carbno, NetHope managing director of global programs. "Keeping these people connected is important for their wellbeing. We are fortunate to have the financial support of organizations such as The Patterson Foundation to help us further our mission of using technology to keep these displaced Venezuelans connected and informed."

On average, more than 5,000 people a day are leaving Venezuela. The majority are traveling to neighboring countries such as Colombia, Peru, Chile, and Argentina. Many of these individuals must travel more than 1,000 miles by foot with limited access to resources such as food, shelter, and medicine. The number of people leaving Venezuela is expected to rise, resulting in a greater need for connectivity networks.