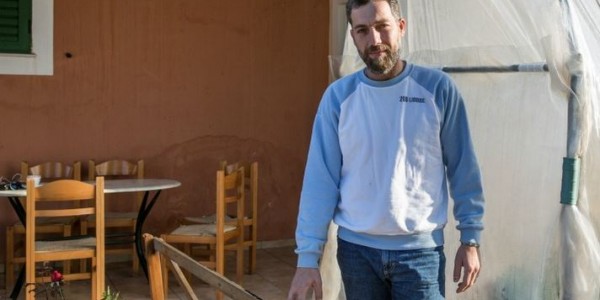 
As soon as I stepped out of our van at the Andravida camp, I was greeted by several Syrian refugees. Ahmad Berajekly was one of those curious onlookers. He and his younger brother invited me to their home, a small apartment in a former housing community that had been converted into a refugee camp of 350 Syrians. I would share an Arabic coffee with them and hear about their long journey from Aleppo, Syria.

Ahmad had been working as a tailor with his father in Aleppo. A little over a year ago, the bombings had become too dangerous, and Ahmad, his brother, his wife, two sons, and parents made the long journey to Turkey, where they stayed for over a month. Ahmad’s father and younger son left Turkey first, and were able to make it to Germany, where they now live.

While in Turkey, Ahmad met a smuggler who arranged for them to reach Greece. Ahmad and his family joined 61 other refugees in a boat — at the cost of $700 per person — but were stopped at sea and sent back by Turkish authorities. After a second attempt, Ahmad’s family was able to make it to Greece.

Ahmad thought he would be just passing through Greece on his way to Germany. He didn’t know that the border was closed at Macedonia. And he didn’t know he’d be living in a refugee camp. Now, he, his wife, his brother, mother, and his older son are stuck, and they don’t know when they’ll be able to leave.

Before NetHope arrived at Andravida camp, the internet signal was really weak. Sometimes inclement weather interfered with signal strength, and other times, it just didn’t work. When I explained NetHope had come to improve the networks, a huge smile broke over Ahmad’s face, and he thanked me. Ahmad goes online not only to gain news and information about what’s happening back in Aleppo, but also to stay in touch with his youngest son, aged 11, in Germany. Through video chat they’re able to see each other face to face. Ahmad hopes to be reunited with the rest of his family, but until then, he relies on a strong internet signal to keep them connected.

After our chat, Ahmad invited me to stay for dinner with his family. I’d been on the road for a few days, and it was my first home-cooked meal in a while. We talked and laughed over tabouli, baba ghanoush, and a meatball and tomato stew. I was so thankful to have shared that experience with them and to hear more about their journey.

Note: The NetHope-led Syrian Refugee Connectivity Alliance was made possible by the support of Cisco, Facebook, Google, Microsoft, and The Patterson Foundation. With the completion of this mission, 75 refugee camps in Greece now have Wi-Fi, providing refugees with critical access to family and friends and services.