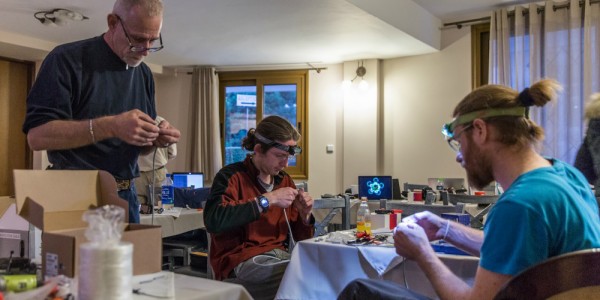 Posted on March 05, 2020 by NetHope
When a disaster occurs, time is of the essence. This applies not only to those directly affected by hurricanes, earthquakes, and other natural and human-caused disturbances but especially for the nonprofits that are dedicated to responding in the immediate aftermath and assisting with subsequent recovery efforts.

The "invisible" part of disaster response is the funding that is required to make these actions fast and seamless. While traditional fundraising methods can be effective in obtaining funds, the process can be cumbersome, slow, and unreliable. Catalytic funding can help negate these drawbacks and inspires others to be proactive in disaster response.

The Patterson Foundation (TPF) has pioneered this concept of playing the role of the "first-in" funder prior to and at the onset of a disaster when funding support is needed most. This first-in approach includes funding for disaster preparation, a vital task to ensure a quick response.

As an example, TPF provided funding in previous years to support preparedness work in the Caribbean region, helping provide money for large-scale trainings there in 2018 and the ability to pre-position equipment for the next—and unfortunately inevitable—natural disaster. That preparation has paid off, enabling NetHope to respond quickly to Hurricane Dorian in September 2019. In conjunction, TPF also stepped forward rapidly to kick-off the response funding appeal in the Bahamas this past fall to set the stage for other donors. This funding catalyzed other donors to step up and provide funding, volunteer staff, and in-kind donations, making it possible for NetHope to reach its goals within the first few weeks of the appeal.

"We reached our goal of supporting members, the Bahamian Government, humanitarian responders, and the affected population with connectivity when they needed it most in the first days and weeks after the disaster. As a result of this funding and preparation, we were able to leave some of the equipment staged after Dorian as a reserve for use in future emergencies, building local capacity, preparedness, and resilience," explains Brent Carbno, NetHope's Managing Director of Global Programs. "The funding has also allowed for other preparedness opportunities in the Bahamas and the region, which is quite vulnerable to future emergency events."

Preparation, via training, equipment, and staffing and rapid catalytic funding is critical to a quick and effective response capability. The Patterson Foundation's commitment to early and regular funding signals confidence in NetHope's approach with other funders, leading to increased partnerships with other companies, organizations, and foundations.

"Rather than having grant cycles or requests for proposals, The Patterson Foundation can be agile in how it funds nonprofits," says Michael Corley, Senior Consultant for Administration for TPF. "We've learned over time that being a catalytic funder can have a profound impact on nonprofits and lend credibility to help raise additional funds. Catalytic funding provides support, especially in emergencies similar to what NetHope often deals with, to begin projects and respond quickly."

While Hurricane Dorian is the most recent example of the effectiveness of catalytic funding, TPF has proven to be a steady and ready partner in quite literally creating a calm before the storm. We value its partnership and its forward-thinking approach to creating a network of reliable funders and ensuring that NetHope is poised to respond rapidly to help our responding members direct aid to vulnerable communities in the wake of a disaster.