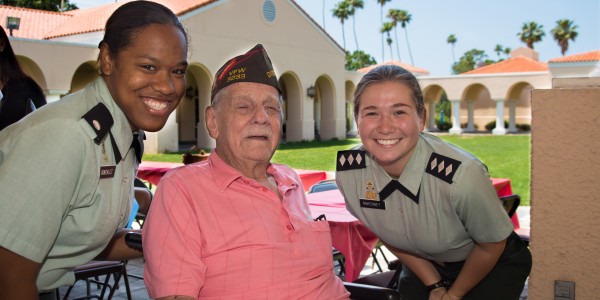 Posted on April 16, 2013 by The Patterson Foundation

That was the magic in La Musica's concert honoring veterans Monday at Sainer Pavilion on the New College of Florida campus. La Musica, a Sarasota-based organization that brings European and American musicians together to perform chamber music, invited veterans from all walks of life to experience the unique performance that was taped and will be shared with an interactive teaching guide with Sarasota County Schools.

In partnership with Sarasota Military Academy cadet volunteers, local veterans and their guests enjoyed a catered lunch prior to the performance. This is the first of  a yearlong series of events through the Legacy of Valor campaign that honor veterans, inspire patriotism and embrace freedom in our community.

Robert O'Neill poses with a photograph of himself at 5 years old performing in a minuet in New Port, Rhode Island.