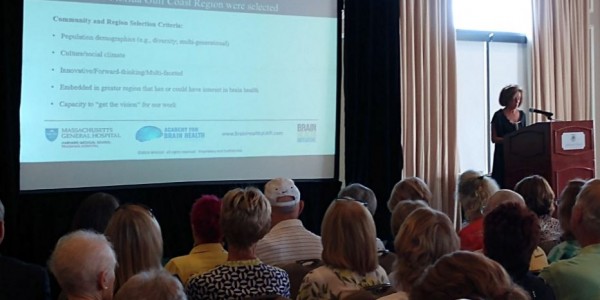 Lakewood Ranch on the Road to Ambitious Brain Health Study

Posted on May 22, 2019 by Michael Moore Jr., Herald-Tribune Media Group

“This is why we’re all here,” Dunn said. “I think that discovering the basis of brain health is the most important medical challenge of our time. What’s incredible is that we all have an opportunity right here and right now to do just that.”

The initiative, which was officially announced in March as a way to utilize the Lakewood Ranch community for groundbreaking neurological research, included a discussion of the results of a stakeholders survey on Tuesday, marking the completion of one of the first elements that will ultimately shape the brain health study.

The venture is a collaboration between Massachusetts General Hospital, the Academy for Brain Health and Performance, and the community developer’s CORE campus, which stands for Collaboration Opportunities for Research and Exploration. Its goal is to establish the Lakewood Ranch community as a center for brain-health science, yielding fresh answers to age-old questions about cognitive research and brain health.

The survey was part of the phase I pre-pilot stage of the initiative, which involved building relationships with local businesses and organizations in the form of identifying community coalition members to help facilitate the project. Some of these members include Lakewood Ranch Medical Center, Lakewood Ranch Business Alliance, and the Bradenton Area Economic Development Corporation, among others. In total, more than 20 local organizations and businesses have pledged support as part of the coalition.

“We basically dated for a year to see if it was a good fit,” said Stephanie Peabody, who is credited with conceiving the project.

A total of 454 adults and 42 youth completed the stakeholders’ surveys, which were developed to prioritize interests and concerns within the community to shape the next phase of the program.

Some of the top health goals by the respondents to the survey involved gaining a greater life satisfaction, increasing physical activity, improving cognitive function, and developing better nutrition. The greatest strengths of the Lakewood Ranch community according to the survey? Sense of community, abundance of amenities, the organization and well-planned nature of the community, and the fact that there are events and activities for all ages.

The survey also noted that respondents felt that they have had increased life satisfaction within the community, decreased sedentary behavior and an overall decrease in obesity. “Community members are health-conscious, and they report more positive health and well-being trends than negative trends by over 150%,” the report reads.

The survey did, however, note an increased perception among community members in the areas of stress overload, drug use, alcohol overuse and anxiety. And while the report noted that there “was remarkable unity in responses across both age groups and sector groups” there was a difference in how age groups perceived stress overload, which was noted as a negative health trend in those below the age of 50, but as positive in those 50 or older.

This data will be used to conduct the next phase of the project, which is embarking on a pilot study to collect brain health data through web and phone-based surveys that will be distributed to representative samples of Lakewood Ranch residents. To develop these additional surveys, the venture aims to conduct key informant interviews and focus groups with residents, thus creating a baseline survey that will capture risk and protective factors linked to brain health that include biological, physiological, behavioral, cognitive, and social factors. Eventually, if all goes well, this will lead to phase III, which is a long-term study that will monitor brain health across an entire lifetime.

While phase I and II are already on the table, more funds need to be secured to complete the project. The short-term goal for fundraising by the venture is $1.6 million for the first three years. If completed, those conducting the study are confident that it will put Lakewood Ranch on the map as a model for cognitive research.

“This study will be comprehensive to get a better understanding of what brain health is and what causes brain diseases,” Dunn said. “Before 1948 and the Framingham Heart Study, we had no idea what causes of cardiovascular disease.”

Back then, Dunn said, dying of heart disease just seemed like a normal thing that happens. She thinks that the “Brain Health Initiative at Lakewood Ranch” can be the equivalent of the Framingham Heart Study, but for brains.