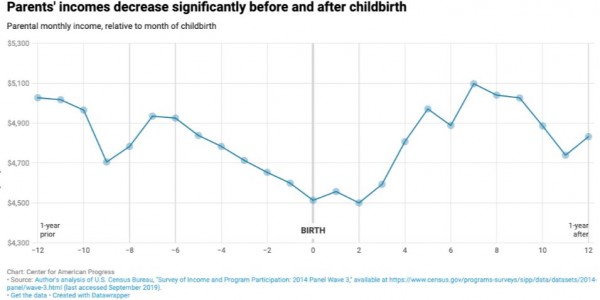 What do parking spaces in Manhattan, 1982 Bordeaux, and early childhood care have in common?

What sets early child care apart is its impact on families and the economy at large.

The average cost of full-time infant care in child care centers is $9,589 a year, topping the average cost of in-state college tuition. That is nearly 20% of median household incomes — twice what the U.S. Department of Health and Human Services considers affordable.

It’s also scarce, and when shopping for a place to entrust their baby, parents’ questions about safety and staff can dwindle to “do you have a spot?” since approximately half the country has too few licensed child care options.

As a result, families have to make tough decisions that often rest heaviest on mothers’ shoulders.

“The system is pushing a lot of women out of the workforce not because they want to leave it, but because they have no choice due to the cost of early child care. Economists have said support for new mothers would have a huge impact on the GDP, increase spending, and grow the economy,” said Rasheed Malik, senior policy analyst for Early Childhood Policy at the Center for American Progress and author of a recent report analyzing the economic effects of access to child care for families with children younger than three.

“Employers want it too because they lose their parent employees or find they’re stressed and not performing well,” he added.

The lack of access to affordable early child care costs businesses about $4.4 billion a year in lost productivity and working families $8.3 billion in lost wages.

The report signals it as one of the main reasons the U.S. trails other economically developed nations when it comes to female labor force participation.

Malik points to a dated mentality that assumes mothers will be able to leave the workforce until school kicks in.

But often mothers forgo those costs for a patchwork of care from neighbors, friends, family members, and unlicensed care centers in homes.

Only about one-quarter of children younger than three attend licensed child care centers.

Also stated is the failure to apply new, deeper understandings about the first years of life and the role of early quality child care in optimizing them.

During those years, the brain undergoes the most significant growth spurt it will ever see, with millions of neuron connections made daily.

“Infants should be in a developmentally appropriate environment. That’s difficult work to do with an eye toward early cognitive development and takes experience and knowledge. A friend or family member may be trustworthy and caring, but they may not have that understanding,” Malik said.

The Child Care for Working Families Act aims to create a federal policy that will provide high-quality, affordable child care to all parents, but remains stalled in Congress.

For now, the Child Care and Development Block Grant is the only source of federal funding for child care subsidies for low-income working families to fund access to quality child care. Still, only one in six eligible infants is receiving it.

It’s also underfunded, and many states don’t reimburse providers enough to participate in the program.

“It’s something every voter and politician says is a critical investment with a good return on the dollar, but we’ve failed to invest in it yet. We’ll see more sacrifices and losses for families and employers until we get there,” Malik said.