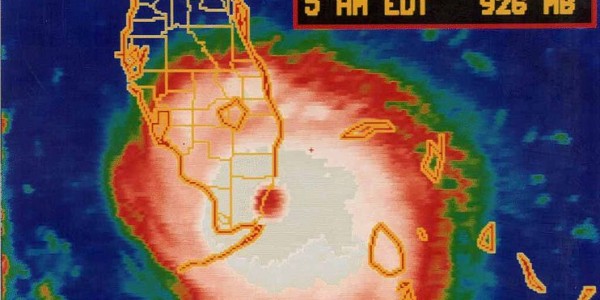 How Hurricane Andrew changed how I look at journalism

Like many residents of Florida’s Gulf Coast, I spent part of the weekend moving lawn furniture under cover, buying extra batteries and making sure that I knew where all the flashlights were located.

Preparing for tropical storms and hurricanes is just part of our life here.  As someone who has lived in Florida now for nearly 20 years, I’ve seen some big storms and some that fizzled, those that we dreaded as they inched across the Atlantic and those that seemed to pop up from nowhere.

While all of the storms over the years blur together in my mind, there is the one that stands apart, not only for its catastrophic power but because it changed the way I thought about journalism at a very basic level.

I thought about Andrew on Friday, the anniversary of the storm’s landfall in South Florida. I was standing in line at the grocery store with a case of water and more batteries when it dawned on me where I’d been on that same date 20 years before.

I was just two months into a job at The Miami Herald, working as a copy editor and feeling more than a little anonymous. I’d been an up-and-coming city editor at The Virginian-Pilot newspaper in Norfolk, Va., when I took the job in Miami. It was a career decision made, like every career decision before it for me: A step up the journalism ladder, a bigger, more prestigious paper, a chance to keep rising professionally.

But before I could do that, I’d have to make my mark at The Herald, and that was going to be a harder thing to do than at my previous papers. This was a tough newsroom, filled with ambitious reporters. Every student here was valedictorian somewhere else, and I’ll admit I already was handicapping my odds of quick career advancement. I’d told the managing editor when I interviewed that the job I most wanted at the paper was his; now I was trying to figure out how to live up to that bravado from a position proofreading pages and writing headlines for stories on page 2B.

It was already past mid-August, and the hurricane season had been a quiet one. Andrew popped up quickly. What I remember most about watching it in the days before it hit was how it seemed to just march steadily across the ocean.

We hunkered down in The Herald’s newsroom, with its tall glass windows looking out on Biscayne Bay, and listened to the storm blow in. The newsroom was dark, and the wind was howling up the elevator shafts, and all of us were thinking about the reporters who were out there in the storm, with no way to communicate back to their colleagues downtown. It was, in every sense of the word, surreal.

It wasn’t the night that I spent in that newsroom that changed how I thought about journalism; it was watching these journalists in action during the next days and weeks. Because I was just a cog in the machine, I had the rare opportunity to observe closely, to listen to reporters and editors think through not just how to cover the news but how to help a devastated, hurting community.  For the first time in my career, an event was not framed in my mind as a “story,’’ which implies something you can shape and form. This was news as public good, as community service at the most fundamental level.

The moment that shifted journalism’s role in my mind came the morning The Herald published this headline: “We Need Help.’’ It wasn’t a quote from someone, it wasn’t some dispassionate analysis of the situation: It was the newspaper speaking in the community’s voice.

The paper continued to live this commitment to channeling the community’s voice through its “help’’ pages – page after page of listings of people seeking helping and those who were offering it. In the days before the ubiquity of home computers and Internet access, these pages were a lifeline for people otherwise cut off from connection.

Hurricane Andrew taught lessons in disaster response not just to newspapers but to a whole range of organizations – FEMA, Florida’s emergency managers, non-profit organizations. Part of the disaster of Andrew was made not by nature but by man’s inadequate response – well-meaning groups that showed up with the wrong materials and ended up needing help themselves, government organizations that had failed to prepare adequately before the storm and were slow to grasp the magnitude of it afterwards.

What it taught me is that journalism is not a ladder to be climbed. It is not about “stories.’’ Journalism, when it is most relevant, is about channeling the voices of the community. The objective, dispassionate stance I was taught in journalism school blew away with Andrew that night in Miami. Whatever the platform, whatever innovations shift the ways we consume and act on information, it is the journalism of connection – not of judgment or of distance – that matters most.