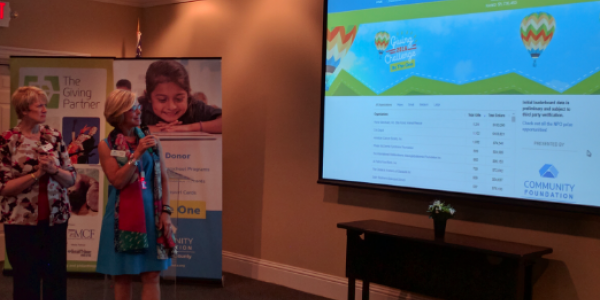 Posted on September 21, 2016 by The Patterson Foundation

The Community Foundation of Sarasota County’s 2016 Giving Challenge has raised more than $5.6 million through 63,567 gifts, with an added $7.5 million in matching funding from The Patterson Foundation benefiting area nonprofits.

During the 24-hour Giving Challenge, nonprofit organizations encouraged their supporters and the public to make charitable contributions online at www.GivingPartnerChallenge.org, with the minimum gift amount set at just $25. Of all the gifts, 49 percent were less than $50 and 23 percent were $25.

This year, The Patterson Foundation encouraged donations from both new donors –individuals who did not donate to a particular organization during the 2015 Giving Challenge – and returning donors – individuals who did support a particular organization during the 2015 Giving Challenge. This opportunity encourages organizations to engage new online donors as well as loyal returning supporters during this year’s event. The Patterson Foundation provided support in two ways:

“The response from donors during these 24 hours was fantabulous, and it is a testament to the hard work and outreach efforts of the regional nonprofits that participated in the 2016 Giving Challenge,” said Debra Jacobs, president and CEO of The Patterson Foundation. “As exciting as it has been to watch these organizations innovate and share their stories, The Patterson Foundation is most eager to witness how the new and renewed connections with donors formed through the Giving Challenge will strengthen their invaluable services in our community.”

For months leading up to the Giving Challenge, participating local nonprofits laid the groundwork by working with their staff and board members to develop fun, informative, and moving campaigns to rally support from the community. Organizations shared stories, photos, and videos about the impact they are making in the areas they serve, and many created new relationships within the nonprofit community, with the business community and with numerous media outlets to enhance their efforts as well.

Local organizations that participated in the Giving Challenge all made a commitment to transparency by having published profiles in The Giving Partner, an online tool that helps donors make informed decisions by providing comprehensive and in-depth information on an organization’s needs, programs, financial history, governance and management structure.

“Wow! What an amazing community we call home,” said Roxie Jerde, president and CEO of the Community Foundation of Sarasota County. “As foundations and local nonprofits take a larger role in defining a sense of community, belonging, direction, and higher purpose for their region’s citizens, the Giving Challenge has become an essential opportunity to spread the spirit of generosity in our region over the past 24 hours. What a community pride point knowing the impact on so many lives that will be the result of the outpouring of generosity by our community. We truly thank everyone who took the opportunity to be the one to make a difference.”