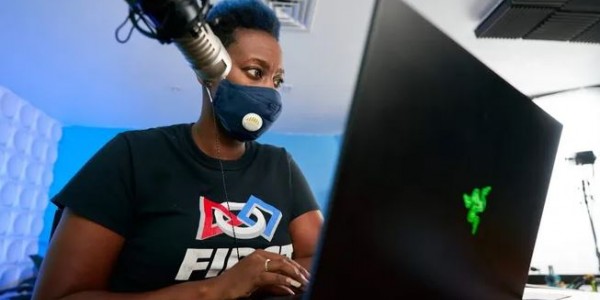 FUNducation's Founder on a Mission to Bring Digital Literacy to Children and to Make S.T.E.A.M. Fun

Posted on December 15, 2020 by Louis Llovio, Sarasota Herald-Tribune
As the light at the end of the COVID-19 tunnel appears to get closer, one of the major changes to society and the economy that’s likely to stay with us is that more parents and students work from home.

That’s a worry for many experts concerned about what will happen to families who do not have access to basic internet service and technology and cannot participate in the new economic model.

But what’s often overlooked, particularly when it comes to young people, is that getting broadband and a laptop is a good first step, but it doesn’t mean much if the recipients don’t know how to use the tools they’ve received.

“It is three-pronged, right?” Lafontant said. “You can’t expect kids to be digitally literate if they don’t have access to those tools to learn.”

Lafontant is a Sarasota engineer and teacher working to help bridge the digital literacy gap through FUNducation, the organization she founded several years ago and registered as a nonprofit last year.

Lafontant first saw that children needed to be engaged in the sciences and technology as a young civil engineer just out of college.

One of the requirements of the associations she belonged to was that she had to speak to students and encourage them to enter engineering.

“I had a huge wake-up call,” she said. “Not only did these kids not even know what engineering was, but they also detested the subjects that it would take to do it—the math and the sciences. I think that’s where it started...to see a student get that ‘wow’ moment, that just became my drug.”

FUNducation was created to focus on getting kids S.T.E.A.M. – science, technology, engineering, arts, and math – skills. She focused on projects like robotics, coding, and drone technology to engage students as part of a practice she calls “educational espionage,” which is making an activity so much fun that students don’t realize they’re learning.

But when the pandemic took hold and students were sent home to learn remotely, she saw a huge gap in the skills the students had and the skills they needed to accomplish their work.

“They thought they could flip a switch. But here was the big epiphany: Our kids were not digitally literate; they were digital natives,” Lafontant said.

Lafontant found that kids knew how to make Tik-Tok videos, play online games, and scour YouTube, but they lacked the skills needed to get through a school day now and get through a workday when they get older.

That came as a surprise to many.

“As soon as you said, ‘Hey, I need you to create a file for me collecting this data,’ they didn’t know to go to Excel or Google Sheets and do that,” she said. “Most of them didn’t even know what their device was.”

According to a paper on technology in the classroom, the K-12 Teacher Alliance found that “digital literacy is one of those EdTech buzzwords floated by experts as being granular to 21st-century students. It’s everywhere, but figuring out what it means can be daunting.”

In the paper, the Alliance laid out eight skills students need to understand to be digitally literate, including working on digital databases, working together with others online, and working with basic technological tools.

And those are among the skills FUNducation is helping students learn.

Lafontant, who believes that low-income and minority students are disproportionately affected by this gap in knowledge and skills, said the importance of getting young people the skills they need goes far beyond what students are doing in the classroom today.

“We’ve got to get our kids ready to sit in front of a device and have the discipline and the knowledge to function as a professional and as a remote worker,” she said.

With that in mind, Lafontant began to develop a curriculum that would help students get the skills they needed.

First, though, she wanted to find a way to engage and motivate them, especially since these students already had so much going on. She would commit an act of education espionage and hold a competition.

Lafontant called a friend who works at Microsoft and proposed her plan for the Back to School Digital Literacy Challenge.

Microsoft was able to furnish her with some existing curriculum, which she modified to fit her purpose, and she reached out to potential donors to sponsor the gaming systems.

Over the summer and into the fall, she was able to get students from several local organizations, including Girls Inc. and AMIKids, to take her class.

The classes, which taught foundational computer skills, were two hours long and lasted for a week. To qualify to win the prize, the students had to virtually attend every session, turn on their cameras, and answer questions.

Students who completed the program got an entry into the contest and, to help spread the message of digital literacy, were awarded more entries if they got a family member to sign up.

The winners of the contest will be announced in the next few days.

One valuable lesson Lafontant learned from the first go-around is that she doesn’t have to do it alone.

The students take a survey before and after to see how they’ve progressed.

Having digital skills is “like muscle memory,” Lafontant said, and those without the skills don’t have a chance, regardless of the work others did to make sure they had internet service and a computer.

“You pull a kid from school, tell them they’re going to get internet, give them a device, what are they going to do with it? It’s like they have all those tools there, but they haven’t made the connection because they don’t have the muscle memory because they never had the skills in the first place.”