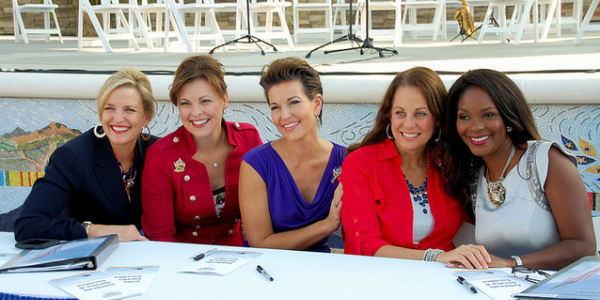 Posted on December 22, 2014 by The Patterson Foundation

As part of The Patterson Foundation's Military Initiative, the Veterans Legacy Summit in November 2014 brought together leaders from across the country who care about making connections to support veterans and their families. Among the participants was a group of Forever Miss Americas who served as masters of ceremony during the summit and visited local nonprofits during their stay in Sarasota.

The nonprofits paired with the Forever Miss Americas reflected on what it was like to have these wonderful ambassadors attend their events and visit their organizations during the Veterans Legacy Summit.

On a bright and cloudless morning, Sharlene Wells Hawkes found herself surrounded by dozens of Sarasota Military Academy Cadets and their families. She had just come off the festively decorated stage at SMA Prep Middle School as the keynote speaker for the inaugural SMA Patriot Day. This event was a fundraiser for the Performing Arts department at the Academy.

With Sharlene's help, SMA raised more than $30,000, including one very generous gift of $17,000 to purchase brand-new drums for the Mighty SMA Drum Line. Sharlene shared the morning stage with Cadets--speakers, singers, and musical performers--all there to celebrate patriotism in the United States of America with the more than 300 event attendees. It was a memorable and inspiring event for all!

Kaye Lani Rafko-Wilson was the first registered nurse to become Miss America. Her visit to Sarasota and her keynote address to the colleagues, volunteers, friends and partners of Tidewell Hospice inspired all of those attending with the gift of her compassion and deep caring for all with whom she comes into contact.

She recounted with grace and humor the story of an extraordinary patient who inspired her to compete just one more time in the pageant. Even as a young nurse, Kaye Lani truly embodied the celebrated quote by Dame Cicely Saunders, a nurse, physician and writer who founded the hospice movement: "You matter because you are you, and you matter to the end of your life. We will do all we can not only to help you die peacefully, but also to live until you die."

Kaye Lani’s extraordinary compassion for the people in her care led her to do just that each time she touched the life of a patient and his family. Even if that meant wearing a grass skirt and performing her Miss America pageant dance for a patient who had only one chance to experience the beauty of Hawaii before she passed. Kaye Lani’s visit championed Tidewell’s mission of helping people live well by providing care, comfort and compassion. Her energy, humor and undeniable commitment to hospice, nursing, and grief support for all who are suffering is undeniable. The gift of Kaye Lani Rafko-Wilson through The Patterson Foundation’s Veterans Legacy Summit reignited the passion in the nurses among us, gratitude and hope among our family members who lost love ones, and determination among all of us who work in hospice to continue to do all that we can to help people not only die peacefully, but also Live Well and Love Well until the very end. We remain deeply grateful to The Patterson Foundation for this priceless opportunity.

We were honored to have Nicole Johnson as a featured speaker at our Diabetes Symposium in Fort Myers.  Ms. Johnson addressed the important topic of individuals with Type 1 Diabetes transitioning from adolescence to college age. She shared timely and useful information with our audience while providing advice and guidance based on her own journey living with Type 1 Diabetes. Young people and their parents in attendance enjoyed her presentation and were informed and inspired by all that they learned from Ms. Johnson. Most importantly, everyone was touched by her underlying message that everyone can succeed and excel in life despite living with a serious and chronic disease. We are very grateful to The Patterson Foundation for the tremendous effort and support that went into the Veterans Legacy Summit, and for making Nicole Johnson’s participation in our Symposium such a big success.

Over 100 Visible Men Academy students were in awe when they had the privilege of interacting first hand with Forever Miss America Ericka Dunlap. The conversation was lively as she spoke about the importance of being thankful and carrying yourself with dignity at an all-school and community assembly, “Gratitude & Grace." Miss Dunlap floated in a crowded room wearing her crimson dress, an ode to her sorority Delta Sigma Theta, and electric blue shoes.

Ericka shared the spotlight with the boys engaging them in an exchange about what gratitude meant to them and discussed their future careers, which ranged from becoming marine biologists and serving in the Army to being Spider-Man! Ms Dunlap also shared her crown with excited community members from the Pride Park neighborhood, including County Commissioner Betsy Benac and Bradenton Alumnae Chapter President of Delta Sigma Theta Sorority Erica Sheppard. Visible Men Academy Ambassadors were very grateful to have led the Pledge of Allegiance at the Celebrate Service & Sacrifice event at Patriot Plaza on Saturday, Nov. 15! These young men heard first hand about the design of Patriot Plaza by art docents, and even took pictures with Keynote Speaker Wes Moore and Congressman Vern Buchanan! The Veterans Legacy Summit events our boys were able to be a part of will help shape their young minds for a lifetime.

During her presentation, Henry -- whose father was a Vietnam veteran -- spoke about challenges facing our returning heroes, primarily finding permanent and affordable housing, jobs, and female veterans’ issues such as sexual trauma suffered during military service and caring for children. She noted that organizations like Goodwill are doing very well in the veterans’ arena, offering kudos to Goodwill Manasota leadership, staff and supporters. Henry also pointed out that creative partnerships are where the most good are done: between government entities, the school system, nonprofits and philanthropists.

During her year of service as Miss America, Henry chose to highlight the needs of homeless veterans; her tour was titled “Honoring our Forgotten Heroes: Our Nation’s Homeless Veterans.” As her year progressed, Henry developed a full-scale platform that encompassed not only homelessness concerns but also healthcare, housing, disability and veterans' benefits. Over the last 14 years, Henry has continued her efforts nationwide by establishing the Heather French Foundation for Veterans, Inc., focusing on community outreach to help better educate young and old alike about programs available to assist veterans and to help increase patriotism in younger generations.