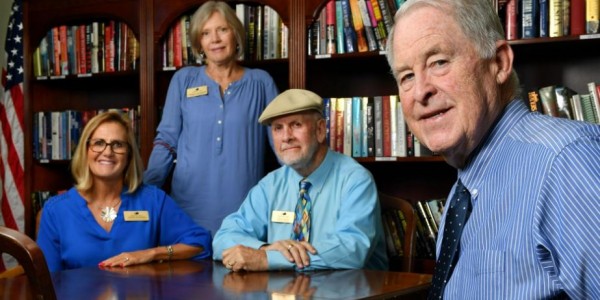 In nursing, assisted, and independent living centers across the United States, patients are denied access to medical marijuana, even if they live in states where it is legal.

The reason boils down to this: As long as the majority of these institutions rely on funding from Medicare and other federal sources, they opt not to put that money at risk by allowing a Schedule 1 controlled substance onto their property.

Under a bill signed by Gov. Ron DeSantis in March that nixed the Sunshine State’s smokable medical marijuana ban, nursing homes, patients in hospice, and assisted-living centers were given some flexibility under Florida law.

Essentially, if card-holding seniors want to light up, they can. But only if the facilities allow it — and few have emerged to challenge the status quo.

Bob Asztalos, chief lobbyist for the Florida Health Care Association — the state’s largest advocacy group for long-term care providers — said that although members see a benefit to the treatment, many feel that their hands are tied by federal law.

“It becomes this balancing act,” Asztalos said. “We are trying to walk the line between the law and the wants and needs of family members.”

Shad Haston, CEO of the Florida Assisted Living Association, said that while some privately owned facilities are allowing medical cannabis treatment, his group warns others to be careful.

“We have told our members if they participate in Medicare, or if they want to participate, they should avoid allowing patients to use medical cannabis in their facility,” said Haston, whose organization oversees 680 assisted-living centers in the state.

Left behind
While state lawmakers have been for the expansion of access to medical cannabis in all of its forms, older adults, one of the largest groups that might benefit, are being left behind, said Josephine Cannella-Krehl.

As a longtime clinical social worker and medical marijuana advocate, Cannella-Krehl’s work has brought her inside many of Florida’s elder housing facilities, running the gamut from independent living to full hospice care.

Many of these institutions tell her that they lack guidance or information on how to get started, she said. Another concern is losing health care licenses because federal law still considers all marijuana use illegal.

“There’s this looming fear that they think their funding is going to get pulled or they will get shut down,” said Cannella-Krehl, the founder of MMJ Knowledge. “While that hasn’t happened, no want wants to be the first.”

Consistent with federal law, even many of the 33 states that have passed legislation allowing cannabis for medical use have drawn the line at allowing it in long-term care facilities, according to a survey by the National Long-term Care Ombudsman Resource Center.

To shield facilities that want to allow marijuana under their rules, Florida became an outlier when it passed the smokable marijuana bill. Sponsored by Sen. Jeff Brandes, lawmakers made it known that the state cannot ban marijuana use from those places.

“Our goal was for flexibility and not to encourage or push anyone into this,” the St. Petersburg Republican told the Herald-Tribune. “Our goal was to make sure there was no statutory hurdle.”

Ron Watson, a longtime health care lobbyist in Tallahassee who helped shape the bill, said that it did not go far enough to encourage these facilities to step forward.

“It was comfort language that was supposed to encourage them to step up,” said Watson, the president of Watson Strategies, a medical marijuana lobbying group. “It hasn’t really done that yet.”

Haston, the CEO of the Florida Assisted Living Association, said that the bill continued to leave many in the industry leery of allowing medical marijuana treatment in their facilities.

“Just because the state passes legislation does not override the fact that the federal government says it’s illegal,” Haston said. “What needs to happen is that the U.S. Congress needs to give states the green light.”

Waiting game
As a federally classified Schedule 1 substance, marijuana is officially considered to have a high potential for dependency and no accepted medical use.

In 2009, the Obama Administration sent a memo, known as the Cole Memorandum, to federal prosecutors encouraging them not to prosecute people who distribute cannabis for medical purposes in accordance with state law.

Attorney General William Barr said in his Senate confirmation hearing in May that he would not go after states where marijuana is legal.

“To the extent that people are complying with the state laws, distribution and production and so forth, we’re not going to go after that,” Barr said.

Several bills have been introduced in Congress in recent years to legalize recreational marijuana but have either been shot down or stalled in committee. Some lawmakers, including U.S. Rep. Greg Steube, a Republican whose district includes part of Sarasota County, have called for marijuana to be removed from Schedule 1 status.

Staggered by the burgeoning numbers of veteran suicides, the Sarasota Republican said at a North Port town hall meeting in May that he supported the idea. In April, Steube sponsored the Veterans Cannabis Use for Safe Healing Act, which would essentially prevent the Veteran’s Administration from denying benefits to soldiers who want to use medical marijuana.

For some veterans, marijuana and cannabis derivatives can be lifesavers that keep them from using addictive medications such as opioids to treat post-traumatic stress disorder and other issues, according to Warriors Rise Up, a Herald-Tribune special report that chronicled how cannabis could be used to combat rising veteran suicides and PTSD. The VA strongly opposes the bill.

“There have been a number of my Republican colleagues who have already said they will support the bill,” Steube told the Herald-Tribune. He also added that Senate Majority Leader Mitch McConnell would likely block a descheduling bill. But Steube said the measure would enjoy broad bipartisan support in the House and could come up for a vote soon.

Testing the waters
Numerous studies and news reports indicate older adults are increasingly turning to medical marijuana to combat various ailments — treating diseases that come with age, including chronic pain and glaucoma as well as Parkinson’s.

Seniors are also the fastest growing demographic in the state, according to the Florida Department of Elder Affairs. Floridians 65 and older will outnumber minors two-to-one in a decade, projections show.

These burgeoning numbers, advocates say, will force many of the state’s long-term care and retirement institutions to develop strategies and protocols for residents and patients who want to continue or start medical marijuana treatment.

Although facilities that accept federal reimbursements have so far been wary to test the waters, local, privately owned independent and assisted living centers seem to be ground zero in the fight for medical marijuana access.

“We know that it’s coming and everyone is going to be forced to deal with the issue,” said Don Fitts, the marketing director of Alderman Oaks.

Last year, Alderman Oaks, a 62-apartment independent and assisted-living center in downtown Sarasota, became one of only a handful of privately owned institutions in the country to craft a protocol for residents who want to use medical marijuana.

Privately owned institutions have more flexibility because they typically do not rely on federal reimbursement dollars. In addition, only a few residents are on Medicare or Medicaid services.

Residents must also purchase their marijuana medication on their own from a state-certified dispensary. They have to self-administer their medication or have it administered by a certified caregiver who is not Alderman Oaks staff.

Cannella-Krehl, a regular presence in legislative committee meetings, is pushing for a provision in the Florida law that would make facilities able to have caregiver status.

As of now, each medical cannabis patient is allowed one registered caregiver who can buy and administer the drug on behalf of the patient.

That can cause problems for residents and patients with memory and mobility issues, she said.

“If you have to register as a caregiver and only one person is allowed to help you with your medication, how realistic is it for a son or a daughter to go to administer the medication to their parents three or four times a day?” Cannella-Krehl said.

Creating dialogue
Many industry members are banding together to gain a better understanding of how to balance the needs and wants of residents and patients with federal and state law.

On Thursday, the Downtown Sarasota Condo Association is dedicating its annual Optimal Living forum at the Ritz-Carlton to medical marijuana and the retirement community landscape.

Cannella-Krehl, Holly Bell, the state director of medical cannabis, and others will give a series of presentations on medical research, legal concerns, and the process of acquiring medical marijuana cards.

“It boils down to a patient’s right for self-determination,” she said. “What happens when their decision is prohibited by law? That shows a great moral and ethical dilemma for health care and long-term care facility professionals.”

Interested?
The Downtown Sarasota Condo Association Get Well With Medical Cannabis forum is scheduled for 9 a.m. to 3 p.m. Thursday at the Ritz-Carlton Sarasota, 1111 Ritz Carlton Drive.

Registration is $30 for DSCA members and $40 for nonmembers. To register, visit dsca.wildapricot.org.