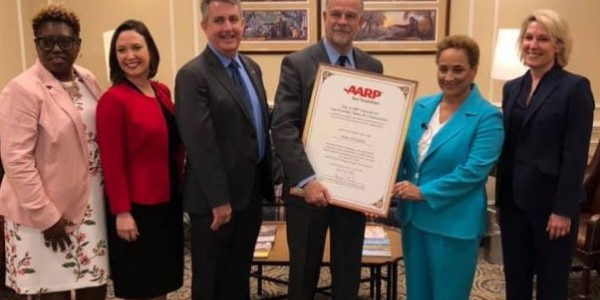 For a community to be age-friendly, its residents need affordable and safe housing, opportunities for staying engaged in activities that matter to them, and access to health care and other services.

An age-friendly community also offers opportunities for people to work or volunteer. More than 8 million of Florida’s estimated 21.6 million residents are older than 50. In the next decade, that population is expected to climb by almost 40 percent.

So when Gov. Ron DeSantis announced earlier this week that the Sunshine State had enrolled in the AARP Network of Age-Friendly Communities, becoming the fourth and largest state in the nation to do so, age-friendly advocates rejoiced.

“It’s more than jumping through hoops to get a plaque on the wall to forget about,” said Jeff Johnson, the state director of AARP Florida. “This is very much an invitation to get to work.”

It will likely be a while before residents see a change.

That’s because the Florida Department of Elder Affairs, the lead agency on the project, needs to develop a plan to work with other stakeholders, including health and transportation departments as well as other statewide stakeholders such as nonprofits and the chamber of commerce.

These agencies will gather community input and craft an age-friendly action plan that will identify goals and objectives based on the responses of residents.

Through AARP and the World Health Organization, Florida will get the chance to partner with other cities, both domestic and international as well as public recognition of the community’s commitment to becoming more age-friendly.

Colorado, Massachusetts, and New York are already participating in the program.

Sarasota County became the first in the state to enter that global network, in 2015. There have been a number of notable age-friendly developments since it launched, from new health and wellness programs at libraries and community centers to a county resolution that urged builders to include age-friendly features in new homes.

One change, called Mobility Mat, was implemented by parks officials. Similar to a hallway runner, it enables people with wheelchairs, crutches, and strollers to visit Siesta Key Beach.

The move to enroll states in the age-friendly network is an effort to expand and connect with larger partners, initiatives, and the potential to implement statewide policies, Johnson said.

“This is a tremendous game changer,” said Chuck Henry, director of the Florida Department of Health in Sarasota County. “To have the state step forward and accept age-friendly as a mission will help us all move through to the next process.”

In a press release, Gov. DeSantis said that Florida’s designation as an age-friendly state demonstrates the state’s commitment to building livable communities for people of all ages.

“In Florida, we are taking tangible steps to make our state more livable for residents of all ages,” DeSantis said. “As our state continues to grow, we must ensure that we do all that we can to meet the needs of our residents.”