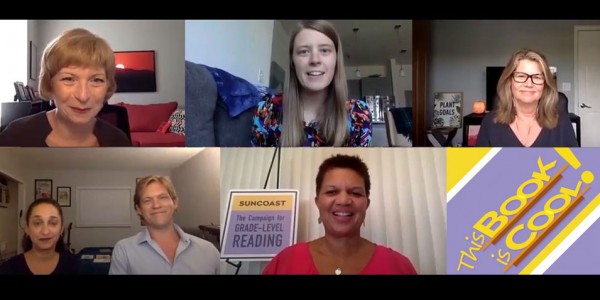 Starting in the Middle: My experiences with THIS BOOK IS COOL!

Sometimes, coming into a program in the midst of it can be an adventure and an important learning experience.

You begin the journey by learning a little about an important project and the impact that it is having. You realize that it’s a great deal of work, but you aren’t sure of the details or efforts to create, implement, and carry out the project. You’re excited about the reactions of the people engaged in the work as you try to connect the dots to see how all the pieces fit together from concept to reality.

This is vague, but I have an example of when this took place and why it matters.

I joined The Patterson Foundation (TPF) in late June of 2020, 3+ months into a global pandemic. I discovered that TPF and the Suncoast Campaign for Grade-Level Reading (SCGLR) had rapidly adapted and innovated to expand its Summer Reading Challenge to create a new program called THIS BOOK IS COOL! (TBIC).

To construct TBIC, SCGLR team members selected 100 books, created 100 activities, filmed 100 webisodes about each book, recruited and managed 100 different featured guests who appeared on the webisodes, edited the webisodes, and distributed the books to 5,302 children in the Suncoast region. You can read more about the enormity of this project here, but just imagine the time and dedication it took to deliver this program.

Beginning my new job one month after the first ten webisodes aired, I found the team in the midst of filming and editing webisodes and distributing books to children. To be frank, I didn’t have much of a role at the time, but I watched the webisodes and learned all I could about the front-end of the program.

After the 100th webisode aired in August and the last book was handed out, SCGLR Director Beth Duda asked me to spend a half-day in the storage unit to get to know the hardworking and dedicated team members who made TBIC a reality. She also asked that I familiarize myself with the books in the unit to begin to understand the logistics behind organizing and preparing the books for delivery. By the end of the Summer Reading Challenge, children in our region read 94,383 books!

The time I spent there helped me comprehend the amount of work it took to organize and categorize these books, and I had many questions. How were the books chosen in the first place? How were the activities developed? As I learned more, I wanted to know even more. Beth asked me to organize and serve as the moderator for a panel featuring some of the SCGLR Engagement Team members, including Jenifer Johnson, Laurie Miller, Kelli Karen Smith, and Ben Tollefson.

Along with Beth, each team member played a critical role in developing and implementing THIS BOOK IS COOL! With help from Donna Puhalovich and Mykenzie Johnson, Jenifer developed and organized each unique activity that went along with every book. Jenifer also served on the book selection committee. Laurie and Ben wrote some of the webisodes, while Kelli served as the production coordinator for each webisode.

With that knowledge, I organized the logistics and timing of the panel. We asked each person to think through the themes they wanted to highlight, brainstorm some books they wanted to discuss, and generally share their experiences with TBIC.

Filming and taping the panel was nerve-racking. Being the facilitator or moderator of any event, much less a taped one, makes me incredibly nervous. And as taping began, I could tell we all were a bit nervous. After a few minutes of conversation, I relaxed and began to enjoy hearing everyone’s unique insights and perspectives.

Through my experience in the panel, I learned from Jenifer how she used her knowledge of Mind in the Making to choose books that included life skills featured in the workshops. I heard from Laurie how much she loved receiving photos of children enjoying the books and participating in the activities. I listened to Kelli share how the intentional efforts to feature diverse books from various perspectives and topics would make each child feel like they could see themselves in the featured characters. I heard from Ben that the families loved reading and discussing books together at mealtimes. And finally, I discovered Beth intended SCGLR to chose extraordinary books, not just ordinary ones.

If you’re new to THIS BOOK IS COOL!, welcome! Don’t feel like you’re jumping in too late. As I learned, there’s always room to learn more! Feel free to check out all 100 of the TBIC webisodes on YouTube. Together, there were more than 27,000 views between June and September of this year.

If you find THIS BOOK IS COOL! is relevant and could be used in your area, we can suggest a title for you: THIS BOOK IS SO COOL!