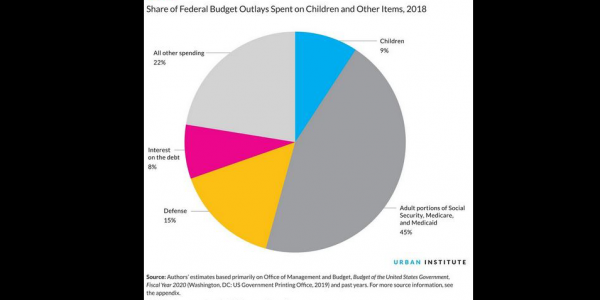 The children’s share of the federal budget is projected to drop from 9.2% to 7.5% over the next decade.

Of the more than $4 trillion federal budget, just 9% goes toward children while 8% goes toward paying interest on the national debt, projected to exceed spending on children by next year and nearly double by 2029.

Federal spending on elementary and secondary education is 48% below peak spending during the Great Recession. Much of the decline is in Title 1 funding, which is lower than it has been in 15 years.

Tax provisions and health programs account for the most federal spending on children. Less than 10% goes toward early education and care, social services and housing, combined.

State and local governments are tasked with filling in the gaps, but similar to the federal spending model, much less is spent on infants, toddlers, and preschool children than on school-aged children, despite the deluge of research pointing to the crucial nature of the first years of life, and their long-term impacts on everything from physical health to eventual income level.

“I think we have the idea that school starts at age five and that local governments are responsible for the years before kindergarten. Our programs and education haven’t caught up to what happens before then,” said Julia B. Isaacs, senior fellow at the Urban Institute and co-author of the report. “We decided to have the federal government take over care for the elderly, and for local governments to run schools but that historical progression has left uneven spending on early education.”

In fact, 44.3% of parents of young children reported difficulty or inability to pay for food, medical care, housing expenses, or utilities in the past year, according to the report.

Almost half of the federal budget goes toward retirement and adult health benefits through Social Security, Medicare, and Medicaid.

The remaining budget shares include 15% on defense, 8% on interest payments on the debt, and 22% on items including agriculture subsidies, highway construction, and environmental protection.

Currently, the children’s share of the budget is projected to drop from 9.2% to 7.5% over the next decade, as spending on Social Security, Medicare, Medicaid, and interest payments on the debt grow.

Thanks to the Consolidated Appropriations Act signed into law in March, next year’s federal budget analysis will reflect a $2.3 billion Child Care Development Block Grant, which will go toward child-care services for asset-limited family members who work, receive employment training, or attend school.

The act also includes an increase of $610 million to Head Start, which provides early childhood education, health, nutrition, and more to asset-limited children and their families.

“It’s still small compared to things like Medicaid or the Child Tax Credit. Early education and care is still an area where there could be more investment,” Isaacs said.