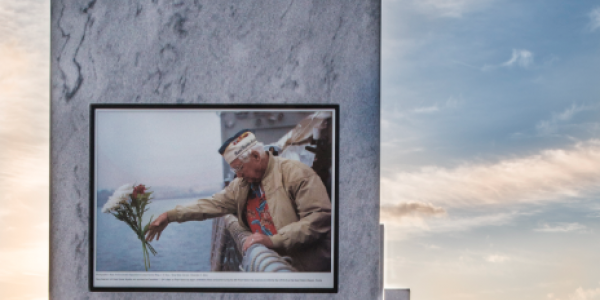 Fanning a flame of community support for veterans

Posted on June 17, 2014 by Linda Gould, consultant with The Patterson Foundation

The Legacy of Valor Campaign to honor veterans, inspire patriotism and embrace freedom appears to be winding down but the community support, enthusiasm, and anticipation mounts with the approaching dedication of Patriot Plaza, the 2,800-seat ceremonial amphitheater at Sarasota National Cemetery.

The spark that Legacy of Valor ignited has grown to a steady and constant flame in our community. This flame burns for veterans and their families and a community that wants to help and support them. Over the past 14 months, the campaign has also shown our region how partnering can bring together time, talent and treasure in a way that almost cannot be measured as new realities are created all around us.

Volunteering is on the rise. People are coming forward to donate their time and funds to help those in need. Partnerships were formed or strengthened, such as the connection between All Faiths Food Bank and Goodwill Manasota. A new relationship was created among CareerSource Suncoast, Goodwill Manasota and the Baltimore Orioles as they worked together to host two different jobs and services fairs for veterans and their families. The result has been an increase in hiring veterans in our community. Many businesses are beginning to emphasize veteran employment. This is exciting to watch -- and what's even more exciting is that many of the partnerships formed over the last year are enduring and expanding!

The Legacy of Valor campaign started a groundswell of support for veterans and their families at a time when it is desperately needed. Events and activities were only one part of the equation. The Unified Legacy of Valor Opportunity was a fundraising challenge that demonstrated how focusing on one central issue for 30 days can bring in substantial donations for nonprofits in our region with programs serving veterans. We saw 12 organizations work together (instead of competing) and they all came out with funding from their joint efforts.

The following exemplifies strong partnerships that developed during the campaign that continue to grow:

Goodwill Manasota continued partnering with other organizations participating in Legacy of Valor. They recently partnered with Girl Scouts of Gulfcoast Florida for the 2014 Giving Challenge. Donations from the challenge strengthen the Goodwill Jobs Connections program while giving support to Girl Scouts of Gulfcoast Florida, a wonderful organization that helps nurture girls of courage, confidence and character.

The Sarasota Farmers Market partnered with a myriad of community nonprofits that support veterans, along with their vendors, to provide two Veterans Appreciation Day events in October and April. The Farmers Market committed to continuing this for at least the next five years!

The University of South Florida Sarasota-Manatee (USF SM) established a Veterans Legacy Scholarship to help veterans returning to school meet their financial needs when there is a gap in funding that might prevent them from finishing their education. Fellow partner The Military Officers Association of Sarasota supported USF SM in their fundraising drive for the scholarship and continue to partner with many other organizations in our community who support those who have served, are serving or may serve in our nation's armed forces.

In many ways, the Legacy of Valor will live on in each one of us -- as we partner, celebrate and thank those who sacrificed so much in order to pass freedom on.