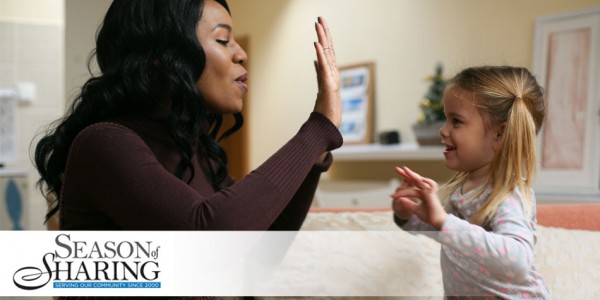 Posted on November 13, 2018 by The Patterson Foundation
Homelessness is an all-too-real prospect for many people and families living paycheck to paycheck or facing significant unforeseen expenses — and one that’s far more challenging to undo than prevent. In fact, it costs eight times more to pull a family out of homelessness than to help them retain their home. That’s why the Community Foundation of Sarasota County and the Herald-Tribune Media Group created Season of Sharing, the annual campaign to help members of our community on the verge of homelessness by providing financial assistance for critical needs like rent, utility payments, child care, transportation, food vouchers, and other emergency expenses.

“Thousands of our friends and neighbors in need have been able to weather life’s hardships and remain safe in their homes through Season of Sharing’s effective approach to strengthening people in our community,” said Debra Jacobs, president and CEO of The Patterson Foundation. “The Patterson Foundation’s continued support aspires to once again elevate the community’s generosity.”

Of those who receive aid from Season of Sharing, only 15 percent require further assistance the following year, indicating that the campaign generates sustainable impact for families in need.

There are no operating costs associated with Season of Sharing. Every year, the Community Foundation of Sarasota County, media partners, and more than 60 organizations donate their time, resources, and expertise to ensure that every dollar raised is distributed directly to people on the verge of homelessness.