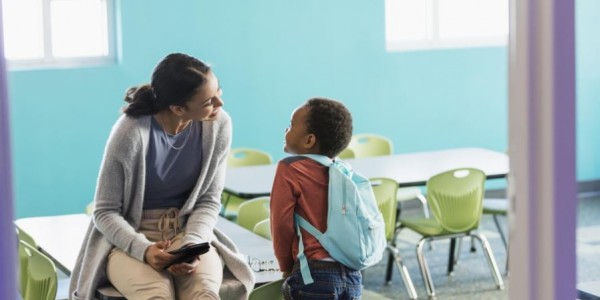 In many elementary schools, it’s easy to know who the class clown is because, on a thermometer cutout on the wall, a clothespin with their name is clipped to the red zone. Likewise, it’s easy to see the names of the “good kids.”

But should it be?

Behavior charts are still widely used as discipline tools, and for teachers with at least 20 students to manage, they may be effective. But for students who have experienced trauma, it can be just the opposite.

“The belief is if we acknowledge positive behavior, it will be increased. But it’s like a public shaming, and a child with trauma processes it differently,” said Amanda Small, a social worker at a charter school in Indiana where almost half of the students have a family member who has been or is incarcerated, or is living with a distant family member because of court-ordered separation.

Such circumstances are known as Adverse Childhood Experiences, or ACEs.

ACEs include abuse, neglect, having a family member diagnosed with a mental illness, a caretaker with alcoholism, and more.

All of us are equipped with a flight or fight response to protect us against perceived danger, but according to research, high or frequent exposure to ACEs, without the buffer of a caring adult, can lead to the consistent trigger of the response, causing toxic stress that can impact everything from a child’s behavior to physical health.

“A child who has been through trauma is already in a flight or fight zone. So when they’re put down in front of everyone on a behavior chart, they may feel a fight response,” Small said.

Just under half of U.S. children have experienced at least one ACE. And one in ten has experienced three or more. The higher the number of exposure to ACEs, the higher the risk of that child experiencing learning difficulties and problems controlling their emotions in challenging situations, among other outcomes.

With the increase in the number of students with ACEs, and a limited number of educational centers that specialize in supporting them, many end up in traditional schools where the behavior charts are common.

“What concerns me is we’re quick to label those kids as bad without stepping back to ask why,” Small said

Other options include a private system of communicating behavior that is seen only by the teacher, parent, and student.

But a deeper-dive intervention with longer-range results is rooted in something else. Research in school discipline emphasizes the significance of relationships, especially for students with ACEs.

The Take Two, Own Two program at Shue-Medill Middle School in Delaware pairs students with adult mentors already on staff. Every teacher/faculty member in the building volunteers to mentor two students one-on-one throughout the school year, creating a connection that adds to students’ sense of belonging and increases their desire to be in school.

“Instead of highlighting they made a bad choice and letting everyone see that, think how we can communicate that message better. At the end of the day, they want to be heard and seen,” Small said.