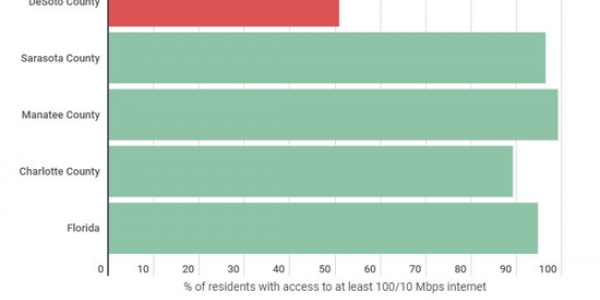 A Federal Communications Commission (FCC) map shows that DeSoto County falls far behind surrounding counties and the national average when it comes to broadband speed.

The map shows that 50.84% of DeSoto residential broadband customers have access to speeds higher than 100/10 Mbps, while the rest of the residential service is at 25/3 Mbps or less. The national average broadband speed as of 2020 was 86.04/11.86 Mbps. This means that nearly half of the DeSoto County residents only have access to internet speeds that are more than three times less than the national average. 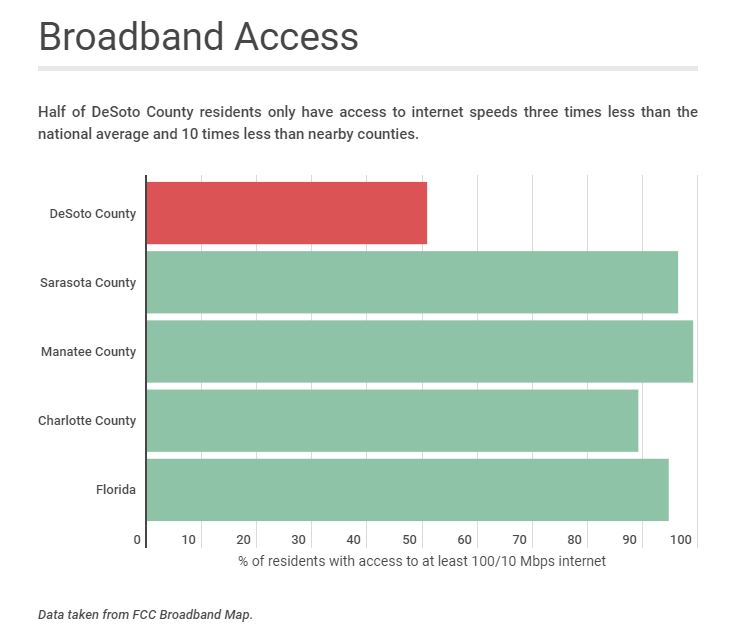 In neighboring Sarasota County, 94% of residents have access to speeds of 250/25 Mbps, more than ten times faster than half of DeSoto County residents. In Manatee County, 99% of the population has access to the same high speeds as Sarasota, with 87% in Charlotte County.

The map also indicates that 11.41% of DeSoto County have access to higher speeds of 250/25 Mbps using cable and fiber, but multiple organizations and residents have confirmed that these types of connections are limited. They are not readily available for regular residential use and are instead used by larger business and social service entities who can afford those connections. 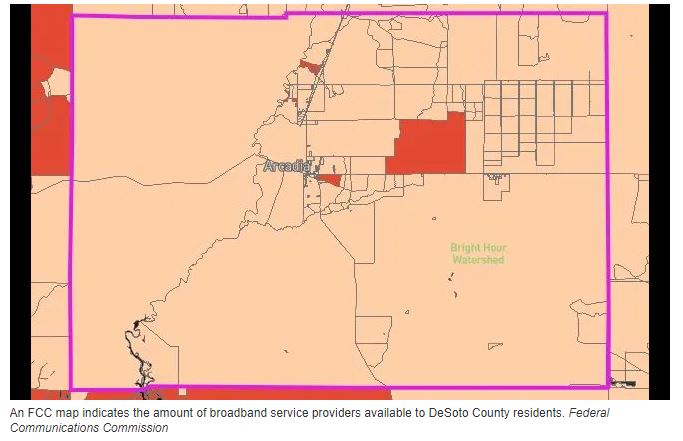 For example, South Florida State College is in the months-long process of installing fiber-optic broadband, but the employees who work there cannot receive fiber to their homes and struggle with reliable access.

Lumen (formerly known as CenturyLink), DeSoto's main broadband provider, offers Digital Subscriber Line, or DSL, for residential services. For most people in DeSoto County, it's the only game in town. Lumen sent a link to the FCC map as a response to the question of what broadband speeds they provide in DeSoto County. When asked to confirm whether the 2019 data presented in the map is currently accurate, Lumen did not respond.

The lack of decent connection speeds in DeSoto County has challenged many residents of the county and larger entities ranging from the fire department to the K-12 school system. The business community and new residents are feeling the effects too.

Debbie Wertz, CEO of the DeSoto County Chamber of Commerce, is used to residents and businesses voicing complaints about the county's slow internet.

"When people move here, they cannot believe how unreliable the broadband connection is and that there aren't more options in most of the county," Wertz says. "And even for people who live in Arcadia, it's just very random who is going to have reliable service."

DeSoto County's Chamber of Commerce is located in the heart of Arcadia, the most populated area in the county, where broadband tends to be better than other areas. But even at the chamber, troubles with uploading videos and other tasks that require a substantial amount of bandwidth can be frustrating and take a long time, says Wertz.

While she does not blame Lumen for the broadband issues because she thinks they may be doing their best, Wertz is convinced that unless the company looks deeper into the service issues and works on them, or more competition comes into the area to provide incentive for upgrades in broadband infrastructure, the problem will remain.

She believes that the issue is more important to solve than ever.
"Reliable internet access used to be more of a want more than a need," Wertz says. "But especially after COVID-19, we realize that it is a lifeline. Whether you want to work from home, get an education, or take care of your health, it is crucial."